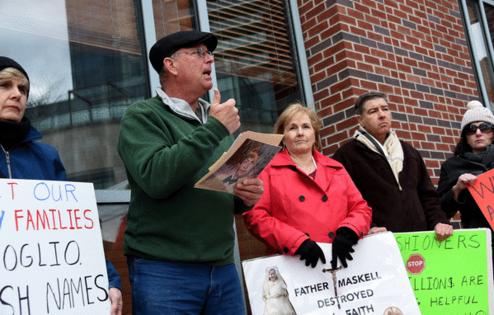 BALTIMORE — After the more than 270 members of the U.S. Conference of Catholic Bishops elected their new president in Baltimore, some observers of the nation’s most powerful Catholic body hailed the choice of Archbishop Timothy P. Broglio as a healthy compromise between the conservative and progressive factions that have emerged into public view in recent years.

Others were less sure about the longtime archbishop of the Archdiocese for the Military Services, USA — and they gathered Wednesday outside the Baltimore Marriott Waterfront, the site of the bishops’ annual conference, to make their voices heard.

With icy winds gusting in from the Inner Harbor, representatives of the Survivors Network of Those Abused by Priests, or SNAP, held signs and announced three principal demands of the incoming conference president: pledge to stop the church from using funds to fight legislation that would give survivors more time to seek justice against abusers; call out a minority of bishops who have declined to make public the names of credibly accused priests, and create systems for monitoring the behavior of those have been separated from the church over sexual misconduct.

SNAP leaders said they have particular concerns about Broglio, as the archdiocese he oversees is one of only three archdioceses and more than 12 dioceses that have yet to make public the names of “credibly accused clergy, deacons, nuns and laity.”

The Charter for the Protection of Children and Young People, a 2002 document by the bishops that established procedures to address allegations of sexual abuse of minors by clergy, calls for “transparency" but stops short of requiring such disclosures.

A spokesman for the Archdiocese for the Military Services, Taylor Henry, referred reporters to the U.S. Conference of Catholic Bishops for comment. Chieko Noguchi, the organization’s public affairs director, did not respond Wednesday to messages.

According to a statement issued by SNAP leaders, the election Tuesday of Broglio “sends the message that the transparency promised” in the bishops’ 2022 charter “is no longer a priority for the church.”

Frank Schindler, a SNAP member and an abuse survivor who lives in Baltimore, called Broglio’s election “a disgrace” and a “clear sign” the church is not backing up its claims of openness.

SNAP leaders said in their statement that Archbishop Jose H. Gomez, the outgoing conference president, did too little to counteract what they called the “ongoing sexual abuse scandal in the Catholic Church.”

“We hope beyond hope that this new president will break from the trend set by his predecessors and actually address this ongoing scourge, as opposed to ignoring it,” the statement continued.

The statement pointed to the March suspension of the Rev. David Marcotte, a priest in Indianapolis, amid allegations of sexual abuse of a minor, and last month’s release of a report by Michigan Attorney General Dana Nessel about abuse in the Marquette diocese, as evidence that abuse remains a problem.

Inside the Marriott, the bishops on Monday acknowledged the 20th anniversary of the creation of what’s also known as The Dallas Charter. SNAP leaders criticized what they termed a “victory lap.”

David Lorenz, director of the organization’s Maryland chapter, described the document as “toothless” because it contains no enforcement provisions.

“What do thoughts and prayers do to solve these problems and help survivors?” he said. “Do you know what happens if a bishop violates the charter? Nothing.”

In Maryland, people who were abused as minors have 20 years after turning 18 to seek civil redress in sex abuse cases. A state law passed in 2017 increased that grace period from seven years. There is no criminal statute of limitations on child sex abuse cases in the state.

The Archdiocese of Baltimore began posting the names of credibly accused priests on its website in 2002 and continues to update the list.

The Maryland Attorney General’s Office is completing work on a four-year investigation of allegations of abuse in the archdiocese by priests, teachers and other employees, The Baltimore Sun reported Monday, and one protester called that a positive development.

Teresa Lancaster of Edgewater survived abuse in the early 1970s by Joseph Maskell, a priest and chaplain at Archbishop Keogh High School. She hopes the report will be released as planned by early December.

“Names are going to be named,” Lancaster said. “We need to get these names out, not just of the abusers, but also of the enablers who make it happen.”

Bishops of the Church of England said Wednesday they will continue to refuse to perform same-sex marriages, reaffirming that “holy matrimony is between one man and one woman for life.”

The announcement comes after a ...Read More

She and her 72-year-old mother had just won asylum because of ...Read More