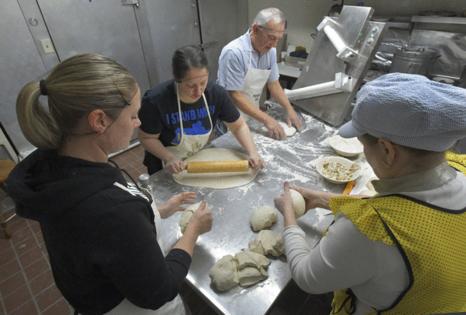 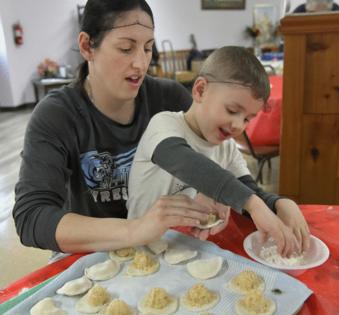 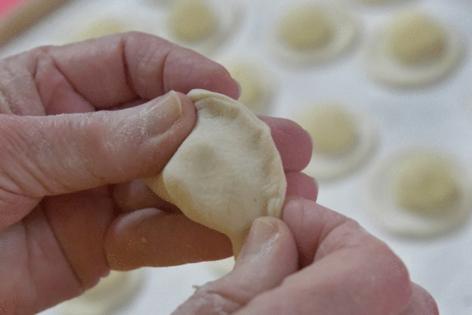 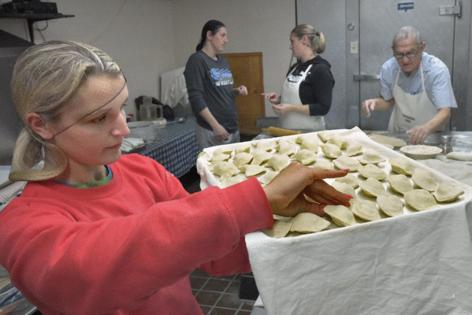 BALTIMORE -- Growing up in Baltimore's Canton neighborhood in the 1950s, Maria Kaczaniuk embraced her Ukrainian heritage, learning to embroider traditional dresses and pillows, dance in the Ukrainian style and cook Ukrainian food. When she married a fellow Ukrainian American in Baltimore, they spoke to their children in Ukrainian at home.

“It was important for my children to know where we came from, who we are and what we stand for,” Kaczaniuk said. “We still refer to it as ‘our country.’”

On Thursday, Kaczaniuk, 71, sat with members of her congregation in the basement of their church, St. Michael Ukrainian Catholic Church on Eastern Avenue, folding pierogies, small dumplings eaten in Ukraine and other parts of Eastern Europe. In the kitchen, volunteers kneaded and flattened out dough, scooped potato filling and boiled the finished product, placing them on trays to cool.

“We have it down to a science,” said Daria Hauff, Kaczaniuk’s daughter, who coordinates this and other church events.

This month, proceeds from the church’s regular pierogi sale will assist with aid efforts in Ukraine. Preorders have been double their usual numbers as people looked to find ways to help the beleaguered nation. Hauff needed to cut off orders — the church is sold out through May — and recruit more volunteers than usual to meet the demand.

“This month was really unbelievable,” she said. “With the momentum going we’re considering adding more sales.”

Though its numbers have declined since Kaczaniuk was a girl, St. Michael’s remains a pillar of the area’s Ukrainian American community, with about 200 families in the congregation. COVID has reduced attendance at Sunday services even further, she said.

Its members say they are devastated by Russia’s ongoing invasion of their mother country, which has seen hospitals targeted along with women and children. Many have family in the country and receive daily updates on attacks.

Kaczaniuk said a recent phone call with a cousin in Lviv was cut short when her relative heard sirens and had to take cover in an underground shelter. The ease of communication makes “you feel like you’re part of what’s going on there,” she said. “It’s very very hard.”

Some older parishioners of St. Michael’s fled Ukraine during Soviet rule, when Ukrainian Catholics and members of other religions were persecuted. Church leaders in the U.S. have warned that a return to Russian domination could force its followers underground.