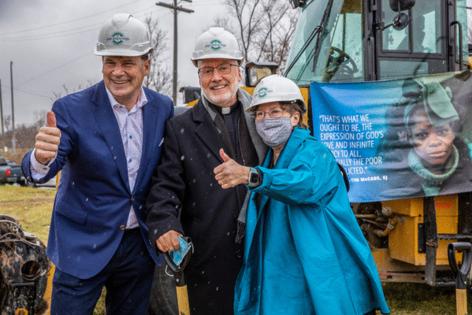 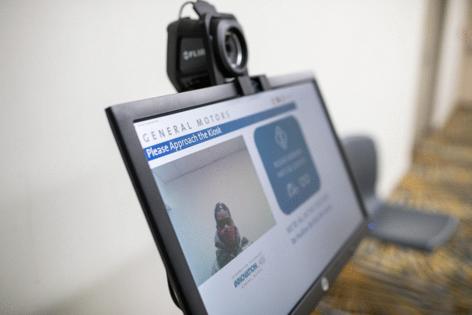 McCabe is the executive director of the Pope Francis Center, a day service for homeless people currently running out of Huntington Place, formerly called the TCF Center.

It was mid-December, the temperature was dropping and COVID-19 cases were rising. McCabe couldn't have 150 to 200 homeless people waiting outside, shivering, as staff slowly screened people for COVID symptoms as they entered.

"GM has been such a community partner and so supportive of us all along the way," McCabe said. "I knew, when I had seen its kiosks in the Renaissance Center, if I called GM, they'd help us get them."

The thermal scanning kiosks are contact-free temperature sensors. In mid-2020, as some employees started returning to the office, GM placed several at the entrances of the Renaissance Center in downtown Detroit — GM's world headquarters.

The Pope Francis Center's administrative offices are also located in the RenCen so McCabe was familiar with kiosks. He figured the kiosks would allow for faster COVID screening of homeless visitors at Huntington Place as they enter, moving the line indoors efficiently.

When McCabe called Terry Rhadigan, GM's executive director of corporate giving, on Dec. 17, he asked Rhadigan for the name of the vendor from which GM bought its kiosks.

Rhadigan said he gave McCabe the name, but he decided to look in GM's metaphorical broom closet to see if the company had any spare kiosks lying around.