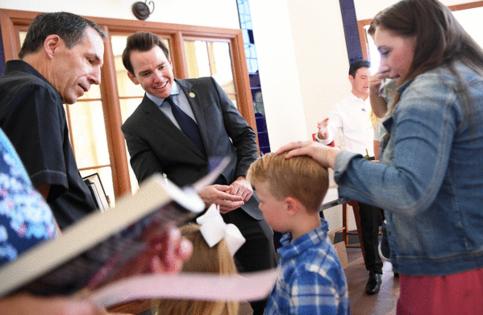 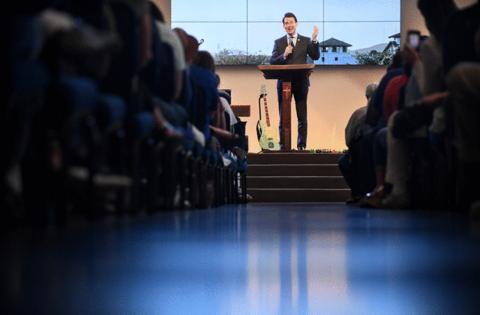 “People of faith, in my opinion, have stood on the sidelines for far too long. We need to get involved. And that is why I’m running,” Elder told the 5,000 people who packed the sprawling Rocklin church campus to watch his 30-minute conversations with the pastor at each of the three Sunday morning services. An additional 25,000 watched online. “I’m doing it because I feel that I have a patriotic, a moral and a spiritual obligation to fix this state to the extent I can.”

More than 400 miles south, after another pastor prayed and a choir sang, a different Christian congregation was applauding the man Elder hopes to replace should he be recalled: Gov. Gavin Newsom.

“The Bible teaches us we are many parts but one body. And when one part suffers, we all suffer. This notion of a web of mutuality — that we’re all in this together,” the governor said in a five-minute appearance at the Youngnak Church of LA Sunday morning.

As candidates crisscross California ahead of the recall election on Sept. 14, faith communities have become a central place for proselytizing to potential voters. The role of religion on the campaign trail has been amplified in recent weeks by lingering anger over California’s COVID-19 restrictions that severely limited in-person worship as well as Elder’s rising candidacy, which has enjoyed significant support from Christian conservatives.

Of all the candidates, Elder has made arguably the most concerted effort to win over faith communities. In the nearly two months since he announced his run for governor — prodded by friend and devoted advocate Jack Hibbs, the pastor of Calvary Chapel Chino Hills — Elder has courted evangelicals at megachurches across the state.

He and other Republican candidates have seized on the closure of churches and religious organizations during the pandemic, harnessing anger over the shutdowns to generate enthusiasm for the recall among conservative voters.

An early contribution of $500,000 to the recall effort came from Orange County donor John Kruger through his limited liability company Prov 3:9, named for the Bible verse: “Honor the Lord with your wealth and with the firstfruits of all your produce.” A company representative said in January that Kruger believed Newsom’s executive actions restricting in-person religious assembly violated the U.S. Constitution.