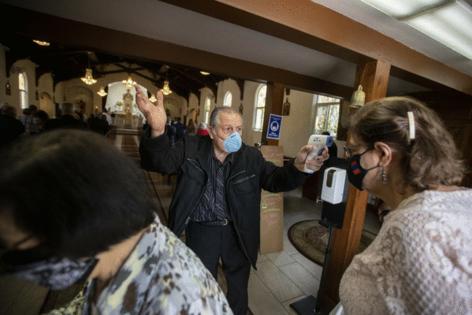 LOS ANGELES – On the outskirts of Boyle Heights, a remnant of the neighborhood's historic Armenian past is having a revival.

The faithful are traveling from as far away as Simi Valley and Cerritos to pray at Our Lady Queen of Martyrs, a church once deemed the center of Catholic Armenian life in Los Angeles.

Founded in 1952, the church hosted about 400 parishioners weekly in its heyday. The facility celebrated Mass for Armenians in their native tongue, and its cultural center once served as a place to learn about their homeland from local guest speakers.

But over the decades, the cream-colored church's prominence has been overshadowed by St. Gregory's cathedral in Glendale.

Nearly all Armenians who once settled in the blocks bordered by Pleasant Avenue and Echandia Street to Prospect Park and Bridge Street have died or moved to more affluent neighborhoods, such as Glendale and Pasadena. And loyal churchgoers more recently were temporarily shut out when Queen of Martyrs closed its doors because of public health orders linked to COVID-19.

Yet amid a year marked by record deaths, unbearable grief and economic uncertainty, the pandemic has unexpectedly found a way to breathe new life into this weathered house of worship.

Longtime parishioners are slowly returning to sit in their self-designated, creaky pews. The Rev. Armenag Bedrossian, the church's sole pastor, is again hosting coffee and lunch after Sunday services. And he's seeing new, younger faces in the crowd — albeit ones who are wearing face masks.

"People want to come back," Bedrossian said. "I think the pandemic was like a spiritual retreat for them to think. It puts them on top of a hill. Either you are close with God or you're going to fall on your head. Which one [are] you like?"

Established in 1858, Boyle Heights was once commonly referred to as the Ellis Island of the West Coast. It was Los Angeles' truest melting pot, a mélange of Mexican, Russian, Japanese, Italian and Jewish settlers. Now, the area is arguably the mecca of Mexican American culture in L.A., with a predominately working-class Latino demographic and landmarks such as El Mercadito and Mariachi Plaza along 1st Street.

But traces of its former ethnic groups can still be found throughout the area. Otomisan, a tiny Japanese restaurant on 1st Street sandwiched between businesses offering services in Spanish and English, still crafts sushi and bento boxes. Breed Street Shul, an Orthodox Jewish synagogue, has been holding services in its brick building since the early 1920s and was designated a city historic cultural monument in 1988. The Evergreen Cemetery is the final resting place for many immigrants, both old and new.

Recently I wrote about common challenging emotional stressors that appear to be mostly stimulated of late by the pandemic’s social isolation. These conditions generate a strange combination of listlessness, undirected ...Read More

ATLANTA — To mask or not to mask?

That’s the question some houses of worship are grappling with following revised recommendations from the Centers for Disease Control and Prevention that fully vaccinated people don’...Read More

The practice of diagnosis, or “full knowing,” is important in medicine and other disciplines, including mental, emotional, social, and spiritual care and treatment.

We want and need to accurately know the issue or ...Read More

There was a time when I ran three to five miles before work and trained for half marathons. Three years ago, however, I tore a muscle in my right hip flexor. I limped for months. I could barely walk, let alone run.

An influencer, that was my mama.

Oh, not like the ones we see nowadays, catching themselves in perfect light, a string of followers and fame. No, my mama had just three followers, my two older brothers and then me.