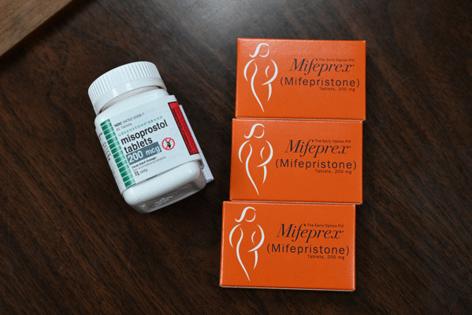 PHILADELPHIA — In the hours after a draft of the Supreme Court abortion ruling was leaked on May 2, Google searches for abortion pills soared — especially in states with greater restrictions on abortion.

By the end of that week, people across America had conducted 350,000 searches for information on the pills, which can be prescribed to induce an abortion in the early weeks of pregnancy — nearly triple the search traffic from the week before, researchers reported in a new study Wednesday.

The uptick in interest died down after that, but a review of Google Trends data shows it has surged once again since the court’s official ruling came out last Friday, overturning the nationwide right to an abortion that was guaranteed under Roe v. Wade.

The authors, who include a new member of the computer science faculty at Bryn Mawr College, caution that the searches do not necessarily reflect an immediate attempt to seek an abortion. The searchers may have been seeking the medications for future use, or they may have been searching for other reasons.

Either way, the traffic surge likely reflects concern about reduced access to abortion in many states, said researcher Adam Poliak, who starts at Bryn Mawr in August.

The finding comes amid legal uncertainty as to whether pregnant people in those states can obtain prescriptions for the pills from doctors based in less-restrictive states via telemedicine. If not, public health experts are concerned they may try to do it anyway, said Poliak, who collaborated on the study with researchers from the University of California San Diego.

“Although abortion medications require a prescription, women may be attempting to stockpile medication or hazardous black-market options in anticipation of curtailed access,” he said.

In the study, published in JAMA Internal Medicine, abortion-pill search traffic in each state was measured on a scale of zero to 100, allowing the authors to compare states of varying populations. The authors then analyzed how the search traffic was related to abortion access in each state — as graded by the non-profit Institute for Women’s Policy Research, with “A” meaning the least restrictive laws, and “F” the most.

During the first 72 hours after the draft court ruling was leaked, search traffic was 64% higher in states with an “F” grade than in those graded “A.”

Pennsylvania fell in the middle on both counts, with a grade of C for its abortion access and a score of 37 on the amount of search traffic for abortion pills — close to the national average.

The researchers counted Google searches that mentioned the words “abortion pill” or the drugs by name. Those include mifepristone, sold as Mifeprex, and misoprostol, sold as Cytotec, which are prescribed in combination.

Mifepristone, also known as RU-486, works by blocking the hormone progesterone, which is required for fetal development. Misoprostol, which is taken up to two days later, empties the uterus by causing cramping and bleeding.

The FDA allows the drugs to be dispensed in a doctor’s office, at a certified pharmacy, or by mail, provided the patient has a prescription.

But some states have enacted laws banning the use of telemedicine for this purpose, while others have enacted what amounts to a ban, by requiring the clinician to be present when the pills are taken, according to the nonprofit Kaiser Family Foundation. Still unclear is whether an out-of-state physician can be prosecuted for prescribing abortion medication to a patient in a state where it is restricted.

The authors of the new study say their goal was to illustrate where demand was greatest, and where patients may seek alternatives when the law stands in their way.

“It is important to track the public’s needs in real time,” said Bryn Mawr’s Poliak, “since public health strategies must be responsive to the public’s dynamic needs that can change very quickly.”