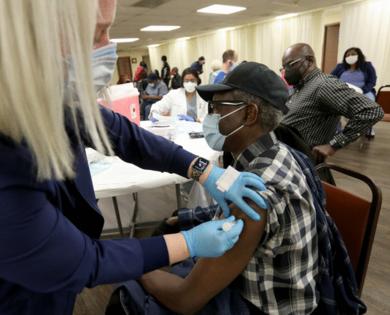 In 2020, one of the most chaotic strings of events in U.S. history occurred in just a matter of months. As the coronavirus pandemic ravaged homes and hospitals, and as communities and businesses began to feel unprecedented economic pressure, and as a contentious presidential election loomed, and as the push for racial justice in America intensified, the cracks in the country's foundation grew wider and more visible.

As one online commentator put it, "Imagine living through the Spanish Flu, the Great Depression, and the civil rights movement ... all at once."

During the mass demonstrations that followed the police killing of George Floyd, politicians and TV pundits voiced concerns that large gatherings of mostly unmasked people could lead to further outbreaks of the coronavirus. Health experts like Dr. Anthony Fauci, one of the nation's leading immunologists, agreed: "When you get congregations like we saw with the demonstrations, that's taking a risk." Even the World Health Organization weighed in, supporting the protests while asking demonstrators to exercise caution by wearing masks.

There was, in that moment, a strange convergence of seemingly unrelated events: A global pandemic, which was affecting the health of millions of people, was suddenly sharing airtime with protests against the unequal treatment of African Americans. And as the two biggest storylines of 2020 briefly overlapped, one of the greatest medical threats to human life at the time was being ignored.

The connective tissue, which bound the pandemic with the protests, was institutional racism. Contrary to what commentators chose to discuss, marches against inequality did not threaten the African American community's health nearly as much as the inequality that already existed in U.S. medicine. Consider the disparities of the disease in question. African Americans comprise 13% of the U.S. population but accounted for a quarter of the country's COVID-19 deaths in 2020. In fact, when corrected for discrepancies in age, the mortality rate for Black people was more than double that of their white counterparts.

Present this data to doctors, and their first response is to blame socioeconomic factors like income and education, elements that exist outside of their offices and medical practices. No doubt, social and economic undercurrents help explain higher rates of coronavirus deaths among African Americans. Racial minority groups are more likely to work essential (front-line) jobs, live in more congested neighborhoods, and have unequal health insurance coverage. Indeed, all of these factors contribute to poorer health outcomes.

Dive a level deeper, however, and it becomes clear that Black patients also suffer higher rates of prejudice and mistreatment in U.S. hospitals, clinics, and physician offices, driving up their risk of death. As an example, billing data showed that African American patients who came to the emergency room with symptoms of COVID-19 (including cough and fever) were far less likely to be tested than white patients with similar symptoms. This doesn't make any sense. With Black patients twice as likely to die from the disease, the logical response would be for doctors to test African American individuals more, not less. But when faced with a shortage of COVID-19 testing kits, a disproportionate number was used on white patients.

In the early days of the pandemic, when emergency rooms had to ration testing kits, doctors could perform only two or three tests per eight-hour shift. In the frenzy, and amid the fear of losing a truly sick patient, doctors saved those kits for the candidates they deemed most deserving. This quick-fire deciding process played out at a subconscious level and, more often than not, the patients who were chosen were the ones who looked most like the doctors.

In the culture of medicine, doctors believe they treat all patients the same. The data presented here indicates otherwise. When presented with evidence of racial bias, physicians point to flaws in society as the reason Black patients experience poorer health. They insist that social determinants (where people are born, raised, work, play and socialize) along with social dynamics (such as racial segregation, poverty and educational barriers) are to blame — not doctors. As in so much of American health care, the systemic and cultural issues are intertwined. In this century, expressions of racism in medicine have become less obvious and more statistical.

For example, one reason African Americans have died at twice the rate of white patients from COVID-19 is that Black people have statistically higher rates of diabetes, hypertension and heart disease than other groups. When not properly controlled, these are three of the medical problems shown to worsen the severity of COVID-19 and increase a patient's chances of dying. The prevalence of these chronic diseases can be attributed, in part, to diet and stress, but much of the problem results from poorer medical care provided by doctors. Overall, the average Black patient receives $1,800 less per year in total medical care than a white person with the same set of health problems.

As a consequence, African Americans experience 30 to 40% worse health outcomes than white Americans, according to a report by the Robert Wood Johnson Foundation, the nation's largest philanthropy dedicated to health. And that's a reflection of how doctors practice.

Months of protests following the killing of George Floyd, combined with the rise of the Black Lives Matter movement across the country, have pushed the issue of race into the doctor's office. It's something physicians can't ignore anymore. It wasn't that racial disparities were completely unknown in health care before. It was that physicians didn't see themselves as contributing to the problem. With all the pressures weighing on doctors today, the thought of addressing institutional racism seems like too great a burden. Therefore, rather than acknowledging their implicit biases or double-checking their decisions when caring for Black patients, doctors continue to tell themselves they treat all patients the same, despite growing data to the contrary.

The long-hidden problem of racism in health care won't be seen, let alone addressed, until the U.S. trains and hires a more diverse physician workforce. Individuals from different backgrounds see problems and opportunities differently. In general, they are more likely to notice problems that affect people similar to themselves. Consider who would be the first to notice higher rates of COVID-19 mortality among Black patients — a white doctor or an African American physician? Who would be the first to hear about the issue of doctors underprescribing pain medications to Black patients? Who would be more concerned about omissions in prevention, doctors whose friends and families are given superior medical care or ones whose communities experience excessive chronic illnesses?

To be clear, white physicians do not consciously decide to give Black patients substandard care. Yet it is also true that solving institutional racism is not their highest priority — especially not when they feel overwhelmed by other workplace demands and systemic pressures. If you doubt that these facts present obstacles toward racial inequality in American medicine, just ask yourself this question: Who would be more likely to challenge the biases embedded in physician culture, the doctors who benefit from those biases or the doctors who are discriminated against?

WASHINGTON — For most of her adult life, Amy Bielawski has gone without health insurance.

Her small Atlanta-area business, which provides entertainment for parties and events, didn't bring in enough revenue to afford ...Read More

It was a very real worry for Shawn and Mariel Mahoney, whose 6-year-old daughter, Layla, ...Read More

It’s no secret the U.S. depends on processed, packaged foods; they are convenient and affordable.

But these foods are also the source of 70% of sodium in Americans’ diets, the majority of which comes from salt added ...Read More

When he arrived at the rehab facility in North Kansas City, Missouri, they sent...Read More

DEAR MAYO CLINIC: As I have gotten older, doctors have placed me on more medications, such as for blood pressure and cholesterol. Also, as I age, I have chosen to take some supplements that are supposed to improve my ...Read More