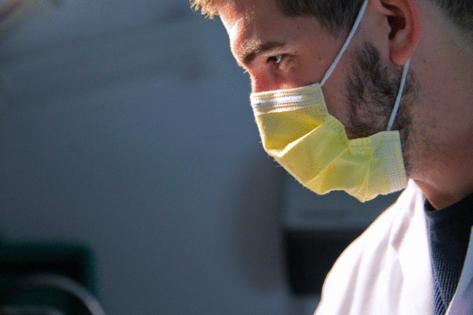 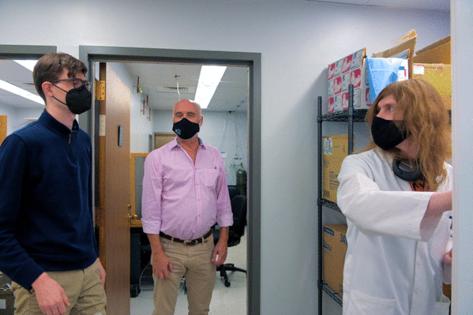 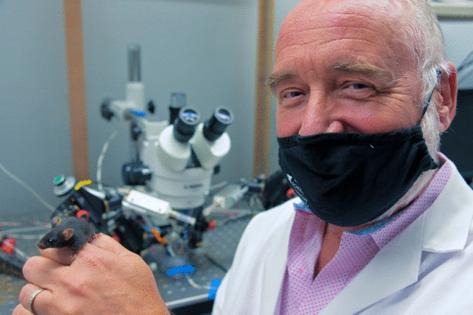 But progress has been slow, in part because the benefits seemed dependent on having potentially dangerous mind-altering psychedelic experiences that often couldn’t win financial support or legal approval.

Now researchers at the University of Maryland say they may have found a way to get to the destination without the trip.

“That’s always been the assumption, that you needed the psychedelic experience,” said Scott Thompson, professor and chair of the department of physiology at the University of Maryland School of Medicine and senior author of the study.

“And there is no denying that taking a psychedelic compound produces an experience that people find powerful and incredibly meaningful,” he said. “It’s been a leap of faith that is why people were feeling less depressed.”

Studies so far of psilocybin, the hallucinogenic component of the mushrooms, and other promising psychedelic treatments derived from LSD and the drug commonly known as ecstasy have all involved these experiences.

Thompson, however, said he’s possibly found a way to block the psychedelic experience but still maintain the antidepressant effects of the drugs — a finding that could potentially lead to their more widespread acceptance and use.

The study, conducted in mice, comes at something of a turning point for psychedelic drugs that were banned for years even in research by federal regulators; the U.S. Drug Enforcement Administration still lists them among the most dangerous substances.

But more recently the government has permitted, and occasionally funded, a growing number of studies in labs at Johns Hopkins University, the University of Maryland and several other academic and private centers nationally.

The studies have been showing benefits, including one published this month in the Journal Nature that found MDMA, known as ecstasy, aided those with PTSD. The study, the first late-stage psychedelic trial in people, could help the drug get federal approval to be brought to market in the next few years by a California-based nonprofit Multidisciplinary Association for Psychedelic Studies.

Psilocybin also has had promising trials in people for depression and a range of other conditions, and researchers believe it too could become a commercial product soon.

But their use still could be limited by the presumed need for daylong, professionally guided psychedelic experiences. Thompson said that could put essential treatment out of reach for many people because of the time commitment, cost and availability of trained professionals.

Further some people with serious illnesses such as bipolar disorder or schizophrenia could have dangerous reactions to a psychedelic experience. Others just may not want such treatment even if traditional drugs such as Prozac don’t work or take too long to have an effect.

“The idea is to make this more available to more people,” Thompson said.

The effort is still in its early stages. In the initial study, he targeted one brain receptor, known as 2A, understood to be responsible for the psychedelic experience.

To test his theory, he stressed a group of mice for several hours a day over two to three weeks. Instead of measuring their mood, he measured their ability to work for rewards — in this case, sugar water. People, and mice, suffering depression lose the feeling of pleasure from such a reward.

Stressed mice didn’t want the sugar water, but a day after a dose of psilocybin plus a drug to block the psychedelic response, the stressed mice went for the treat.

“These findings show that activation of the receptor causing the psychedelic effect isn’t absolutely required for the antidepressant benefits, at least in mice,” Thompson said. “But the same experiment needs to be performed in depressed human subjects.”

Others remain skeptical that it’s possible to separate the psychedelic experience from the benefits, including another researcher in the field, Dr. Collin Reiff, assistant professor in New York University’s Grossman School of Medicine.

“It is missing the whole point,” he said. “The psychedelic experience is largely responsible for the outcome.”

People process their trauma and gain new perspectives during the experience with psychedelic drugs, Reiff said. Getting patients “out of their comfort zone” is part of the process. Turning those drugs into a pill devoid of psychedelics robs them of the necessary journey, he said.

Such a pill potentially would make them no different than existing drugs, Reiff said.

There is a need for a new treatments, he said, as traditional antidepressants fail to work in up to a third of people who try them. They also take longer to have an effect than psychedelic drugs.

The number of people experiencing symptoms of depression has jumped considerably since the start of the coronavirus pandemic, particularly among young adults, according to the U.S. Centers for Disease Control and Prevention. Drug overdoses also have escalated.

Some cities and states already are rolling back local laws to ready for a new class of drugs based on psychedelics. Oregon and parts of California and Colorado have decriminalized psilocybin and Florida is considering it. That’s even before approvals from the FDA, leading to a warning from the American Psychiatric Association about the need for proper vetting and implementation of a new therapy.

Reiff said if the psychedelic drugs are approved by the FDA, insurance companies would cover the costs, making them profitable for companies and accessible to patients.

Still, researchers acknowledge they don’t know exactly what is happening in people’s brains that makes psychedelic drugs so beneficial and long-lasting, sometimes for months or years.

Researchers’ understanding is “still quite primitive,” he said, though it’s widely believed that the psychedelic experience itself is linked to therapeutic effects.

Like Reiff, he is skeptical about the benefit of removing the psychedelic experience but said “it’s an open question that should be studied.”

Griffiths said determining a psychedelic experience isn’t necessary would be a significant breakthrough, especially because the drugs can cause significant adverse effects — including engaging in dangerous behavior and triggering enduring psychiatric illness.

The possibility of a triggering those reactions is why trial participants are screened thoroughly for underlying serious mental health conditions and professionally guided through the experience, he said.

Doing the basic scientific research is important as these mood-altering drugs are getting closer to federal approval as medicines, Griffiths said.

Thompson said he plans to continue the research, next looking at which drugs might work the best without the psychedelic experience and which of more than a dozen brain receptors is the best target.

“The dream here is if you could prevent or diminish the mind-altering properties of the compounds, more people could have the drugs and get the needed benefits,” Thompson said. “But there needs to be broad and deep and reliable scientific findings to convince the public and the FDA this is safe and effective medicine and not something you do at a rock concert in college.”

Although no one wants to see it happen, some state and local public health officials soon may recommend reinstating mask mandates, imposing curfews, limiting travel and even reclosing schools and businesses.

Mayo Clinic researchers recently published a study that shows the proper use of masks reduces the spread of respiratory droplets. The findings strongly support the protective value and effectiveness of widespread mask use ...Read More

Looking back, she said she didn’t notice any health concerns that would indicate she had it. Her daughter Yolanda Williams,...Read More