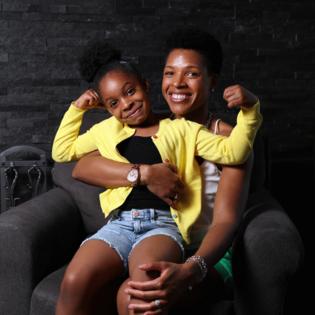 CHICAGO — Michelle Bradley Emebo’s maternal grandmother had open heart surgery. Her mother had a stroke at age 37, and her father has vascular dementia that has been linked to his smoking.

Bradley Emebo’s family medical history came into play during the third trimester of her pregnancy, when she was diagnosed with high blood pressure at age 30. Before she got pregnant, she said, her health metrics were “pretty normal.”

According to the Tinley Park, Illinois resident, after the birth of her daughter Sarai, now 5, her physician told her that her blood pressure would likely go back down. But three months later, Bradley Emebo’s internist put her on a low-dose medication for hypertension. Over a year later, the high blood pressure lingered, and her doctor wanted to increase her medication.

“I knew that if I didn’t do anything to course-correct my high blood pressure, that it could lead to further health complications down the line. ... That was a huge thing for me,” she said.

High blood pressure, a heart disease risk factor, is “a huge thing” for many Black women, according to new research coming out of Emory University Hospital. The Atlanta institution’s Women’s Heart Center 10,000 Women Project, which offers free cardiovascular risk screenings with a focus on Black women, found that this population had high rates of risk factors as early as in their 20s and 30s that put them on the trajectory to develop heart disease.

Dr. Nishant Vatsa, an internal medicine resident at Emory University Hospital in Atlanta and the study’s lead author, analyzed data collected from 2015 to 2018 from 945 Black women enrolled in the project. Researchers looked at health markers like body mass index, blood pressure and cholesterol levels; socioeconomic factors like education, income and health insurance; and lifestyle choices like smoking, diet and exercise.

Nearly one in three of the women in the study ages 20 to 39 reported eating fast food at least three times per week, and two out of five consumed more than the recommended amount of salt daily, tying into key risk factors for heart disease — obesity and high blood pressure.

Heart disease is the No. 1 killer of both women and men, killing more people than all cancers combined. Cardiovascular diseases kill nearly 50,000 African American women annually, according to the American Heart Association.

Vatsa is hoping the study increases awareness about heart disease with the public and with health care providers, so that they are able to educate, monitor and properly treat their patients.