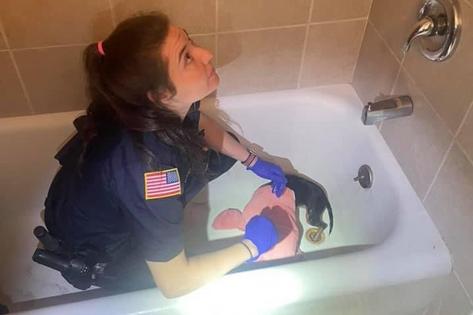 The Sleepy Hollow Police Department said in a Facebook post that officers responded to a local home where a 1-year-old Chihuahua named Daisy had gotten her paw stuck in a bathtub drain.

Police said Daisy's paw had become swollen, causing her family to call for help rather than risk injuring the canine by pulling her paw free.

Firefighters contacted local business Donovan's Plumbing and a plumber arrived on the scene to partially disassemble the drain.

Daisy, with the drain flange still attached to her paw, was taken to the Sleepy Hollow Animal Hospital, where veterinarians were then able to use wire cutters to free her paw.

Police said Daisy suffered only a swollen paw pad and is recovering at home.

(UPI) An Australian woman who won a lottery jackpot of more than $1.4 million said a store clerk talked her into buying the ticket that earned her the windfall.

(UPI) Firefighters in Iowa ended up pulling up the boards from a family's deck to free a puppy trapped underneath the structure.

The Davenport Fire Department said firefighters responded to a home where a woman reported ...Read More

(UPI) An India man paid tribute to his wife of 27 years by building her a house in the shape of a miniature replica of the iconic Taj Mahal.

(UPI) A beachcomber on a British Channel island found a message in a bottle that turned out to have been launched off the Florida coast nearly two years earlier.

(UPI) Police responding to a potential burglary at a New Hampshire elementary school said they responded to find the "suspect" -- a deer -- was still inside the building.

(UPI) A Colorado woman said she will never forget to close her garage door again after a bear raided $600 worth of frozen meats from her freezer.

Amy Franklin of Breckenridge said she found a mess in her garage the ...Read More