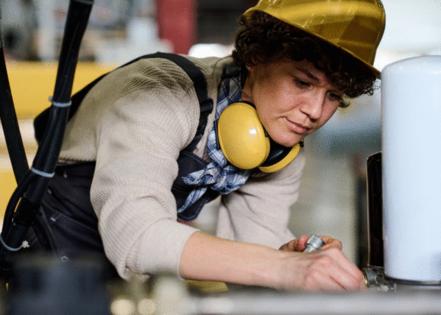 Between January 2000 and January 2020, employment in the manufacturing sector decreased 26% nationwide, in part due to automation and international competition with countries like China. Women were more affected than men, losing 31% of their jobs in the industry compared to men losing 23%, according to the Bureau of Labor Statistics.

Using data from the BLS and the Census Bureau's Current Population Survey, Get It Made compiled a list of trends about women working across the manufacturing industries. Certain data collection only began in 2003, and the graphics reflect this. Data was extracted using IPUMS-CPS from the University of Minnesota.

"Manufacturing" is an umbrella term for a range of sectors, from food production equipment and nonmetal fabrication to metal product manufacturing and parts and equipment building. Women work across manufacturing subsectors, making up a large part of the apparel and textiles manufacturing workforce (67.3% and 53.5%, respectively), and a smaller part of the primary metals (14.3%) and wood products (14.9%) industries as well.

A note about gendered statistics: Data has historically been collected using a binary understanding of sex and gender, making it difficult to represent or capture the full story of the general population. For the purposes of incorporating BLS and Census data, the language specified therein has been used for purposes of consistency. 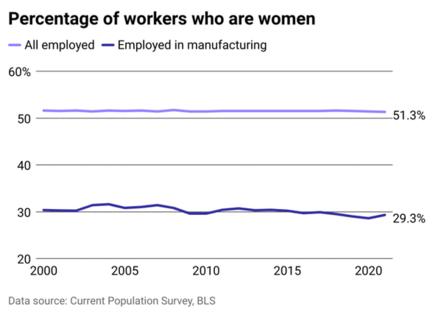 Women continue to make up about 30% of employees in manufacturing

About half of all employees in the U.S. are women, but they make up approximately 30% of the manufacturing sector. This figure has remained relatively unchanged from 2003 to 2021. The American Association of University Women reported in 2020 that the "loss of manufacturing jobs in the early 2000s disproportionately hurt women," and those who remain face sexual harassment and pay/opportunity inequality. These factors, combined with inadequate family leave policies, lead to women in manufacturing being more likely to leave their jobs than women in other industries. 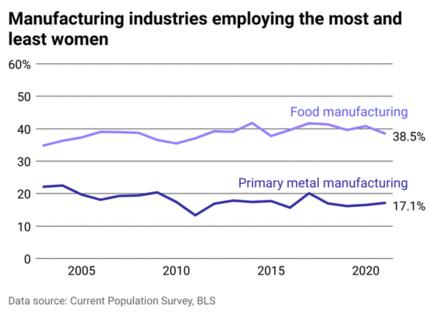 Food manufacturing has seen the greatest increase in women's employment

Food manufacturing has seen the greatest increase in female employees over time, and around 686,000 women work in food manufacturing nationwide as of 2021. This subsector employs the highest percentage of women as well (38.5%). At their lowest participation, women accounted for 34.8% of the food manufacturing workforce in 2003. 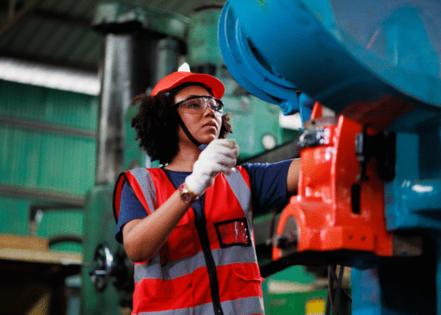 Metal product manufacturing has dropped to the lowest

Several types of metal are manufactured in the U.S. Nucor Corp. in Charlotte, North Carolina, specializes in steel products, while Alcoa Corp. in Pittsburgh manufactures bauxite, alumina, and aluminum. According to the U.S. Geological Survey, iron and steel make up about 95% of the tonnage produced domestically each year.

Metal product manufacturing has the lowest participation of women in the workforce, totaling approximately 255,000. In 2003, more than 20% of metal manufacturers were women. 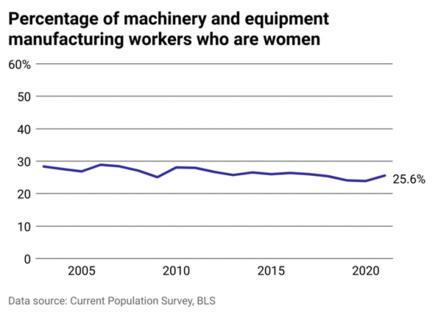 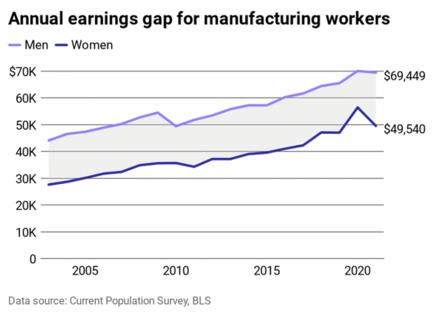 The wage gap has not closed

Women earned 82 cents for every dollar men earned in 2020, up from 80 cents in 2003. The wage disparity adds up, with women in manufacturing earning substantially less per year than men on average—$49,540 vs. $69,449. AAUW reported that women are less likely than men to hold higher-paying jobs in the sector. Women represent more than half of all textile workers, which are paid less than half as much as oil and coal workers.

This story originally appeared on Get It Made and was produced and distributed in partnership with Stacker Studio.

Pet ownership is widespread in the U.S., as the American Veterinary Medical Association estimates that about 38% of households have a dog and around 1 in 4 households have a cat. These beloved pets are important members of...Read More

Is your current credit card balance less than $5,589? If so, you're carrying a below-average amount of debt.

But no matter your balance, now is a great time to get started paying down that debt. With interest rates on ...Read More

Napa. Sonoma. Finger Lakes. Columbia Valley. Many of America's most celebrated wine regions have gained recognition from oenophiles worldwide. But even though producing wine is traditionally associated with certain ...Read More