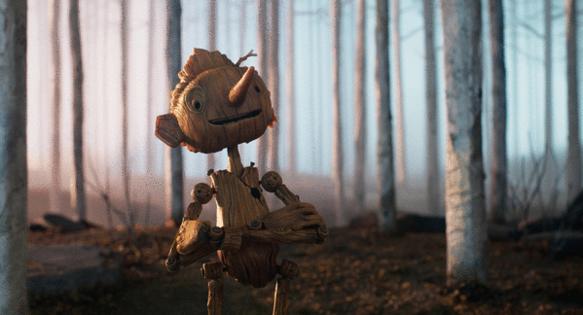 All that's missing is Tom Hanks.

Landing on Netflix almost exactly three months after Disney's live action-meets-computer animation update of its 1940 animated classic, "Pinocchio," debuted on Disney+, "Guillermo del Toro's Pinocchio" is at least a little stronger in just about every way but one.

With apologies to David Bradley, who voices Master Geppetto in the new version — recently released in select theaters — we really liked what "America's Dad" brought to the role in the film helmed by his "Forrest Gump" director, Robert Zemeckis.

Bradley (the "Harry Potter" movies) is perfectly fine, though, and so much of "Guillermo del Toro's Pinocchio" is more than that, a work of stop-motion animation (enhanced by topnotch digital elements) that constantly astonishes visually while providing a few chuckles and heartwarming moments, along with some life lessons for young viewers.

As its name suggests, it is a work by the filmmaker behind memorable works including 2006's "Pan's Labyrinth," 2017's Academy Award-winning "The Shape of Water" and last year's excellent "Nightmare Alley." Del Toro co-directed it with Mark Gustafson and co-wrote it with Patrick McHale,

This latest take on the wooden puppet who wants to be a real boy — the 1880s creation of Italian novelist Carlo Collodi — introduces us to woodworker Geppetto before the loss of his beloved son, Carlo.

"Geppetto lost Carlo during the Great War," says our tiny narrator, Sebastian J. Cricket (Ewan McGregor), the middle initial, we assume, standing for "Jiminy." "They'd been together only 10 years, but it was as if Carlo had taken the old man's life with him."

We witness the death of Carlo (13-year-old British actor Gregory Mann), still inside a church where his father moments earlier had been working on its large wooden crucifix, as planes high above the Italian village release bombs merely to lessen their weight for the flight back to base. Geppetto attempts to run back inside, but he's too late, the explosion knocking him back several feet from the church entrance, from which the "perfect pine cone" Carlo had found rolls out to him.

(The film's opening shot of a pine cone is, in its way, as strikingly beautiful as the image Geppetto sees of the planes navigating the dark-and-rainy night sky.)

Geppetto buries the pine cone near Carlo's gravesite, spending his time there drinking heavily even after a pine tree has grown tall. On another rainy evening, in an angry stupor, Geppetto cuts down the tree — now Sebastian's home — and drags it back to his stop to construct a wooden substitute for Carlo.