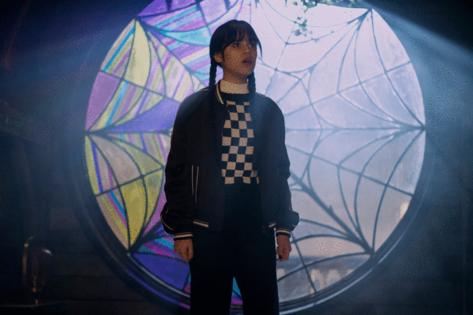 The original script for Tim Burton‘s “Wednesday” was apparently a little too creepy, kooky and altogether ooky for Netflix’s liking, according to series creators Alfred Gough and Miles Millar.

In an IndieWire interview published Tuesday, the screenwriters revealed that executives at the streaming platform wanted to “cut some lines” from the “Addams Family” spinoff starring Jenna Ortega as Wednesday Addams.

For example, the creators cited a scene in which Wednesday’s bubbly boarding-school roommate, Enid Sinclair (Emma Myers), encourages the brooding teen to “take a stab at being social.” In her signature deadpan tone, Wednesday replies, “I do like stabbing. The social part, not so much.”

Netflix allegedly wasn’t fond of the “stabbing” line. But the writers stood their ground, and the violent quip ended up making the final cut after all.

Gough added that the streaming giant was generally “always very supportive and the executives were huge ‘Addams Family’ fans.”

Co-directed and executive produced by Burton, “Wednesday” stars Ortega as the sharp-tongued, goth daughter of Gomez (Luis Guzmán) and Morticia Addams (Catherine Zeta-Jones). The rising scream queen has earned rave reviews for her sardonic, unblinking portrayal of the murderous character — who embarks on a solo adventure at the Nevermore Academy for outcasts in the first season of the show, which began streaming last Wednesday (of course).

The offshoot also features Christina Ricci, who played the Wednesday character in the 1991 “Addams Family” movie, in a supporting role.

In previous “Addams Family” projects, Wednesday “was never the center of the scene,” Millar told IndieWire.

“Because of the ‘Harry Potter’ of it all [the question was] should she be at a regular school and then be a fish out of water?” he continued. “But it felt kind of one-note and she’d always have to return home at night to the family that [we] wanted to get away from.”

On Tuesday, Netflix announced that “Wednesday” had broken the platform’s record for most hours viewed within a week for an English-language show, with 341.2 million hours streamed. The spooky series debuted at No. 1 on the platform in 83 countries, tying the fourth season of “Stranger Things.”

“Ortega kills as the gifted, nihilistic teen who’d rather hang out in a crypt than a club,” Ali writes. “She embodies Wednesday with her flat affectation and utter disdain for her peers. Her ... zombie-like moves at the school dance to the tune of the Cramps’ ‘Goo Goo Muck’ — with a deadly straight face, no less — create one of the top television moments of the year.”