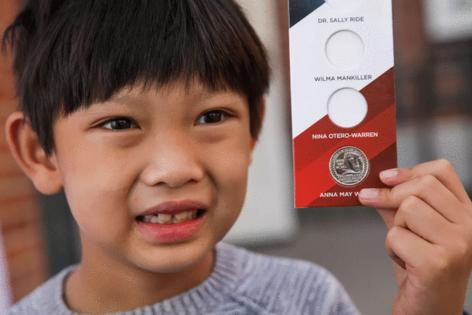 LOS ANGELES — The second-graders rushed from room to room at the Chinese American Museum, making buttons, collecting stickers and seeking clues to trivia questions about a long-ago acting legend, Anna May Wong.

Everyone who finished the scavenger hunt would get a prize — a freshly minted quarter bearing an image of Wong, who recently became the first Asian American woman to grace U.S. currency.

For these children, it's hard to imagine a time when Wong, then the country's most celebrated Asian American actress, was mostly relegated to playing villains or housemaids.

Perhaps when they are older, they will reflect on the glimpse of history they witnessed at the museum — and realize how far this country has come, even as it has further to go.

Asian Americans have gained ground on screen, from "Fresh Off the Boat" to "Crazy Rich Asians" and "Everything Everywhere All At Once."

About 6% of lead actress roles in films in 2020 went to Asian Americans, who are about 6% of the U.S. population, according to UCLA's Hollywood Diversity Report. But concerns about Asian representation and racist portrayals of Asian characters remain.

The quarters the children took home this month could be in circulation for 30 years, with about 500 million eventually produced, said John Chu, branch chief of digital media and education outreach for the U.S. Mint.

Sofia Cabrera, one of the student visitors at the Chinese American Museum in downtown Los Angeles, said the quarter was "special." But her greater concern was what it could buy.

"I'm saving everything for a big, big toy," she said.

Faye Yuen, an electrical engineer from Los Angeles, looked on as daughters Kaylee, 7, and Alyssa, 6, waited in line to see some Anna May Wong buttons being made.