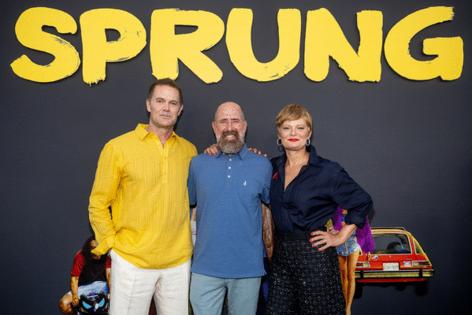 PITTSBURGH — Politicians using inside information to profit off the misfortune of others. Businesses taking advantage of stimulus money. Regular folks hoarding scarce supplies. Those were the stories Greg Garcia couldn't seem to escape during the early days of the COVID-19 pandemic.

"As somebody sitting back in their house sheltered in place, you're like, 'Man, I'd like to see a little justice here,'" the "My Name Is Earl" and "Raising Hope" veteran told the Post-Gazette. "Maybe some of that justice goes toward people doing good things."

Two-plus years later, Garcia has turned that stroke of wish fulfillment into "Sprung," his new sitcom about a group of petty criminals using their particular set of skills to help those adversely affected by the pandemic and punish anyone manipulating a tragic situation for personal gain.

"Sprung," which was shot throughout the Pittsburgh area last summer and fall, dropped the first two installments of its nine-episode first season Friday on Amazon Freevee. The Post-Gazette caught up with Garcia and some of the show's principal cast to discuss what it was like filming such a zany (and timely) project in western Pennsylvania.

This show marks a reunion between Garcia and "Raising Hope" stars Garret Dillahunt and Martha Plimpton. Dillahunt plays Jack, who emerges from half a life spent in prison with a childlike naivety and hard-earned ability to plan elaborate heists. With nowhere to go, Jack ends up crashing with his old cellmate, Rooster (Phillip Garcia), and prison girlfriend Gloria (Shakira Barrera) at the house of Rooster's mom, Barb (Plimpton).

Dillahunt still considers "Raising Hope" to be "one of the best things I've ever done," so he was delighted to work with Garcia and Plimpton again. He hadn't been to Pittsburgh since he was briefly here almost 15 years ago shooting the 2009 film "The Road."

"It's not unlike shooting in New York, but a completely different backdrop," he said. "There's just so much atmosphere. Any way we pointed the camera, there was something cool."

Barb was originally supposed to be played by Illeana Douglas before Plimpton took over that role. She was "very surprised" when Garcia and Dillahunt called her and asked if she could be in Pittsburgh in a few days. Without even reading a script, she agreed. The way Plimpton recalled it, she showed up on Sunday, dyed her hair red on Monday and was shooting on Tuesday.

Dillahunt appreciated how Garcia weaved in early pandemic phenomena like holding your breath while outside and thinking mosquitoes may be carrying COVID "just as these background asides." He also enjoyed that Garcia named the prison in which Jack, Rooster and Gloria spent much of their lives the H.I. McDunnough State Penitentiary, a nod to Nicolas Cage's character in the 1987 Coen brothers comedy "Raising Arizona."