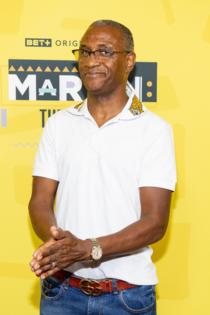 “I’m about giving the audience exactly what they came for: A little bit of sunshine in a gray little world.”

Davidson also has a long career as an actor. His credits include everything from the seminal sketch comedy series “In Living Color” to movies such as Spike Lee’s “Bamboozled” to the animated series “The Proud Family,” both the original and the recent Disney+ revival. “When I did ‘The Proud Family’ 20 years ago, I raised my girls and my son on that,” he said. “And now here they are in their 20s and 30s and I’m raising a whole new generation of kids. How fortunate can I be?”

There have been so many high points in Davidson’s career, including his 2020 memoir “Living in Color: What’s Funny about Me.” When asked about a low point, it was a story from his early years that came to mind: “This is about the failure of a TV show that I worked my butt off for, as the star. And when it was all said and done, I was left with nothing.”

“This was in the late ‘80s, before ‘In Living Color,’ and I had built myself up as the hottest talent in town and I had all these opportunities.

“One of them was a show on CBS with Candice Bergen called ‘Murphy Brown.’ Another was a development deal with Disney for movies and TV. Another was an audition for ‘A Different World,’ which followed ‘The Cosby Show’ on NBC and was the biggest show at the time.

“And then there was an offer from Eddie Murphy’s company to star in the CBS pilot of the TV adaptation of ‘Coming to America.’ The show was going to center around Prince Tariq, the little brother of the Prince Akeem character in the movie, and it was going to be about what his life is like when he comes to America. (Murphy was an executive producer but was not set to appear in the series.)

“So here’s what happened. I didn’t get ‘A Different World.’ I passed on the Disney development deal and I passed on ‘Murphy Brown’ to play Prince Tariq in ‘Coming to America.’

“And I chose it because it was Eddie Murphy — another brother, another Black dude doing really well, you know? It was perfect because, next to Eddie Murphy, I was the funniest guy at the time. His company had an option with Paramount to do television shows, which is huge, and this is the one he wanted to do. And it was starring me! How could it be better? So here was a series that I would star in and have control of. So it just made the most sense to me. I thought it was going to be a huge hit. Most people would have told you: Go with Eddie Murphy, right?