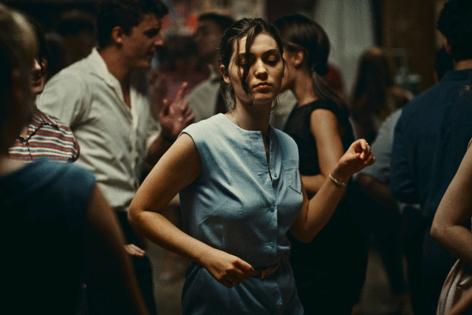 After the Supreme Court overturned the landmark Roe v. Wade decision last week, the country has been reeling. Though the information was leaked two months ago, June 24 was still a shocking and dismaying moment, and a dark day in the history of the United States, as abortion rights took a step back and access to reproductive health care was instantly in peril in many states.

It’s hard to know what to do in times like these, but knowing and understanding the history of the fight for reproductive health care and the reality of what illegal abortion looks like can be a helpful foundation. That’s why Audrey Diwan’s film “Happening,” feels so timely in this moment, despite taking place in France in the 1960s. Based on an autobiographical novel by Annie Ernaux, “Happening” depicts the illegal abortion she obtained as a college student in France. Diwan depicts Anne’s journey with a forthright clarity, and the film, which won the Golden Lion at the 2021 Venice Film Festival is urgent, necessary and unfortunately, the film of the year. It’s newly available on VOD, so rent it for $6.99 on Amazon.

We often forget that "Dirty Dancing," one of the greatest summer movies of all time, is also an abortion movie. The moment that brings Johnny (Patrick Swayze) and Baby (Jennifer Grey) together is the abortion that Penny (Cynthia Rhodes) needs. Baby steps in to take her place in the dance contest while she’s recovering, and a favorite dance movie was born. It’s a romantic, funny and utterly charming film with one of the best movie endings of all time, and it’s about the necessity of abortion access too. Rent it for $1.99 on all digital platforms.

Abortions have been happening since people have been getting pregnant, and they will continue to happen. There’s no way to ban abortion — one can simply ban safe, legal abortion. That’s made apparent in Céline Sciamma’s towering period romance “Portrait of a Lady on Fire” (2019), which is the story of two women falling in love in 19th-century France. One of the subplots involves Sophie (Luàna Bajrami, who also co-stars in “Happening”) the lady’s maid of Héloïse (Adèle Hanele), who becomes pregnant and, with the help of Héloïse and Marianne (Noémie Merlant) seeks an abortion from a local midwife. It’s a small but utterly significant moment of the film. Stream it on Hulu or Kanopy.

Mike Leigh’s Academy Award-nominated 2004 film “Vera Drake” stars Imelda Staunton as a kindly woman providing abortions in 1950s England who is prosecuted for her work “helping young girls out.” The film is a stark look at the way that abortion has been criminalized in the past, and is available for rent on all platforms for $2.99.

Romanian director Christian Mungiu’s 2007 film “4 Months, 3 Weeks and 2 Days” is oft-cited in the pantheon of great, and bleak, films about abortion. Set in communist Romania in the final years of the Ceausescu era, it tells the story of two friends attempting to procure an illegal abortion and the immense struggle that they go through during that process. Stream it on Kanopy, Criterion Channel or rent for $3.99 on Amazon. Similarly, Eliza Hittman’s 2020 film “Never Rarely Sometimes Always” also features two young friends, American high schoolers, who set out to New York City in hopes of procuring an abortion for a pregnant teenager. Stream it on Cinemax Go, Amazon Freevee or rent it on other platforms.

Finally, a documentary, “After Tiller,” which carefully examines the work of doctors who perform late-term abortions and the women who seek such procedures and why. The 2013 film looks at late-term abortions after the murder of Dr. George Tiller, who was assassinated by an anti-abortion terrorist in church. You’ll never look at late-term abortion or abortion in general the same way after watching this film. Stream it on Tubi, Kanopy or rent it elsewhere.