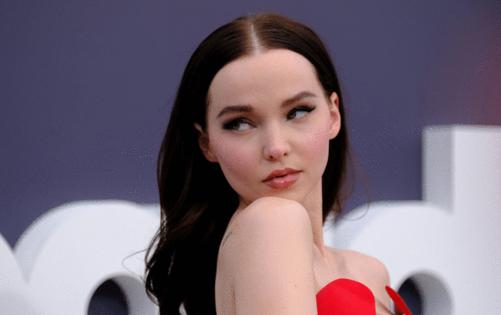 With a laugh — and an almost audible eye-roll — that's how Dove Cameron describes the journey she's been on with "Boyfriend," the sly, smoky electro-pop single that's made her one of 2022's breakout music acts after nearly a decade of acting work in the Disney Channel trenches. In the song, which has been streamed more than 250 million times on Spotify and YouTube, the 26-year-old enumerates some of the many ways she could improve upon a woman's boyfriend, not least her greater stamina and the fact that the women could share a wardrobe.

"The universe must have divined this," she sings over a snarling spy-movie groove, "Ladies first, baby, I insist."

"Boyfriend" presents a darker vision than Disney's smiley "Liv and Maddie" series, in which Cameron played a pair of identical twins, and its "Descendants" series, in which Cameron's the daughter of Maleficent. So too does "Breakfast," Cameron's brand new follow-up single about how she could eat a guy like you for — well, you get it. And part of that is growing up, of course. Yet Cameron says that, even at its most playful, her music also bears the weight of an inordinately traumatic upbringing that included the murder of her best friend by the friend's father (when Cameron was 8) and her own father's death by suicide (when she was 15). She called recently from Vancouver, Canada, during a break from shooting Season 2 of the Apple TV+ series "Schmigadoon!" to talk about it.

Q: Plenty of women have preceded you in figuring out how to define themselves outside the Disney machine. Anyone whose journey you particularly admire?

A: I never had that moment where I was like, "I am a Disney girl." I never looked at Miley or Demi or Selena or Zendaya or Bella or anybody — Hilary Duff or anybody that came before me — I never looked at them and thought, you and me — same. I was always the strange outlier who doesn't belong and who will never fit in. I had huge impostor syndrome. I felt like I was wearing a rubber mask or something. So I don't really look to anybody else for a roadmap. I mean, this whole narrative that I was on Disney and then found my way out with a pop song, it was a total f— accident.

Q: So you're not on a group chat with a bunch of other recovering Disney kids?

A: You know what's crazy? I've only met Selena one time, and I've never met anybody else.

A: Well, I was doing the twins show where it was just me and me, and then I was doing "Descendants" in Canada for three months. It's an isolated journey. I think the Miley/Selena/Demi trifecta, they met because they were all there at the same time. I'm imagining they were all on the lot together. Also — and I cannot stress this enough — my life has always been personal stuff first and career stuff, like, fourth. More often than not my life is therapy, journaling, songwriting, poetry. I don't really run into people very often.