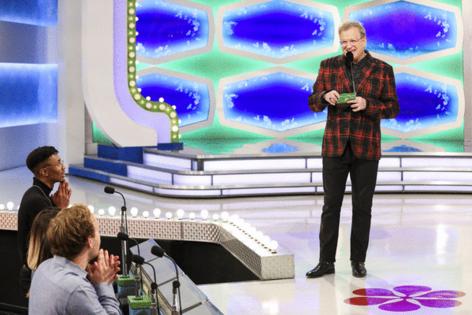 Q: I notice "The Price is Right" is celebrating its 50th anniversary. Yet I have watched black-and-white reruns of the show, with Bill Cullen as the host, that are from the '60s. Aren't they counting these? It's the same thing, just older.

A: According to "The Encyclopedia of TV Game Shows," “The Price Is Right” in its original form premiered in 1956 and continued in various network and syndicated versions until 1964; Bill Cullen was the best-known host of that period. The show was then off the air until 1972 when a revamped version began both on CBS (where Bob Barker would host for the next 35 years) and in syndication. Syndicated renditions came and went over the following years, but the CBS version has been on the air continuously for 50 years, with Drew Carey the current host. That is CBS's rationale for a 50th anniversary.

Q: We watched the first episode of “Buried in Barstow” a few weeks ago. What happened to the second episode? The second episode of a show usually follows a short time later. Can you explain the second-episode delay? Where and how can I see it? I hate being left hanging. It was a great show.

A: The movie “Buried in Barstow,” which starred Angie Harmon as a former hitwoman being pulled back into her old life, certainly shocked a lot of readers when it ended with a set of cliffhangers and a “to be continued” note. But it is not the first episode of a weekly TV series; instead, Lifetime months ago called it “the first installment” of a series of movies. There will be at least one more movie sometime down the road.

Q: What happened to the Rachel Maddow show that was aired daily? Now it is shown on Mondays only. Her shows delved into so many subjects and was one of my favorites.

A: As the Philadelphia Inquirer reported back in May, “Maddow will only host her MSNBC show on Monday nights going forward. It’s part of a new contract she signed with the network that will allow her time to work on other projects for MSNBC and NBC, including a film version of her award-winning podcast ‘Bag Man,’ directed by Ben Stiller.”

Q: Is Linda Hunt’s character “Hetty” ever going to return to “NCIS: Los Angeles”? I know she is not a young woman and that she was in some sort of accident a couple years ago, but she was such a central character to the show it would be a great shame if she does not return.

A: “Her story continues” in the coming season, “NCIS: Los Angeles” showrunner Scott R. Gemmill told Parade.com a while back. To be sure, Hetty has had an on-and-off run on the show, due in part to injuries Hunt suffered in an auto accident in 2018 and COVID-related precautions taken with Hunt, who is 77. But while Hetty had mysteriously disappeared during the most recent, 13th season, she will be back in the 14th this fall, Gemmill said. He added: “We’ve pitted her a little bit against Callen (Chris O’Donnell) in terms of what he went through as a child, so that’s something we’re very eager to explore and have fun with. … This is probably the final step and the real reckoning with his mother figure, which in this case is Hetty.”

Q: Who is the actor who played paramedic Pam Olbes in “ER”? I’ve never seen her name in the credits.

A: That was Lyn Alicia Henderson. According to one reference, she was sometimes billed as Lynn A. Henderson and worked in almost 150 episodes of "ER" during its 1994-2009 run. She has also performed frequently in other series before and after “ER.”