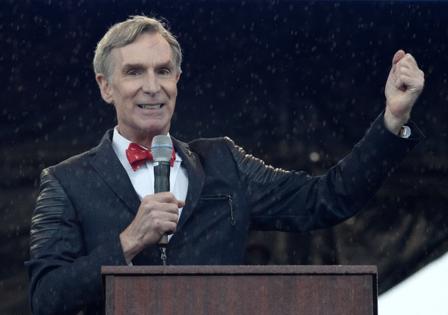 The Science Guy is now the Married Guy.

Bill Nye is officially off the market after saying “I do” to former Washington Post journalist and New York Times bestselling author Liza Mundy in late May, People reported Wednesday.

The couple’s love story — which culminated in a ceremony at the Castle Build’s Haupt Garden at the Smithsonian Institute in Nye’s hometown of Washington, D.C. — originated with one of Mundy’s own works, according to the outlet.

Mundy, 61, in “Code Girls: The Untold Story of the American Women Code Breakers of World War II” referenced Nye’s mother, Jacquline Jenkins-Nye, who was a cryptanalyst. This led the 66-year-old Emmy-nominated mechanical engineer to email her, according to People.

This marriage isn’t the first go-round at happily ever after for Nye or Mundy — whose special day was photographed by Pete Souza, who served as the White House photographer during the terms for former Presidents Ronald Reagan and Barack Obama.

Mundy has a daughter, while Nye was previously married to musician and author Blair Tindall in 2006 — though the nuptials were reportedly not legal.

A representative for Nye could not immediately be reached.