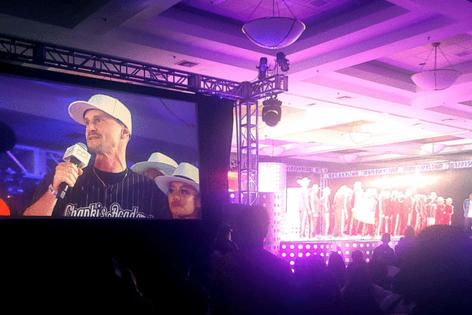 LOS ANGELES — At Hip Hop International's USA Dance Championship this past weekend, hundreds of kids and adults from around the country cheered , waved flags and danced in their seats and onstage at the Los Angeles Marriott Burbank Airport Hotel and Convention Center. The energy was palpable. Even for the older crowd gathered to see children and grandkids compete, it was, dare we say it, infectious. Not a poor choice of words but a much better nonmedical malady than what had been hanging over the event for a couple of years due to the pandemic.

The 2021 championships were in-person, and the kids and adults who competed were joyous, but this year, there were more dancers, more teams and more supporters. Longtime competitors, some of whom had watched online or attended but didn't compete the last few years, took note.

"The teams were stronger. Everybody was motivated and were not rusty. I can feel everybody was coming back to it after a long break," says Greg Chapkis, choreographer (Daddy Yankee, Karol G, Tyga) and owner of the Chapkis Dance Academy in Fairfield, Calif. Chapkis' Northern California crews won two gold and two silver medals, though he wasn't totally sure what to expect from the competition.

"This is a completely new generation. My team is well-known and has a huge legacy. We won six years ago, so now the kids that were watching on livestream are now stepping up. For me, it was a test. I just wanted to see how they do. They're younger. First-timers. Rookies."

His crews did exceptionally well "for him," said one of the dancers. They honored their mentor and teacher as they displayed the Ukrainian flag before their performances.

"Ukrainian flag wasn't in the original plan at all. But I felt like as soon as I saw [the routine] with the flag, it was meant to be," Chapkis said.

A Ukrainian from a famous dance family in the Eastern European nation, Chapkis has been beset by the situation in his homeland as family, friends, students and acquaintances face gunfire and destruction. Preparing for the competition and instructing well over 50 students has not been without its difficult moments and continued frustrations.

"It is bothering me. Nobody believed that this would happen. Nobody believed that it was possible. I did travel to Russia and Ukraine all the time for work. I have students everywhere. And for those countries to be in conflict like this is insane to me. It's nobody's fault. It's just the people on top. Now it just needs to stop. For me, I'm going to express that and spread awareness through what I do. I felt like Hip Hop International is the perfect platform to send that message."

His students could only offer so much solace. They supported him "100%," but when the war started, it was already a tough time.

"[The war] actually started on my dad's birthday. My dad passed away last summer, so it was just really hard," Chapkis said. "It was hard to focus on dance when my people are getting bombed and my family is sitting in bunkers underneath their houses."

In the empty Burbank ballroom as workers stacked chairs and cleaned up after the event, Chapkis could hear the continued happy shouts outside.

He has young crews, but with the world championships looming and even the Olympics around the corner in 2024 — breakdancing now is an official sport — Chapkis was looking forward.

"It would be amazing if they put hip-hop dance in the Olympics," Chapkis said. "First off, they're athletes. They train really hard to hit the stage like this, just as much as gymnasts or bicycle riders, even though it's an art."

The teams' wins will lead to more practice and travel and being even more in demand. It's hard work that may lighten some of the pressure of the current situation at home, but Chapkis is hopeful for the future of his students and his profession.

"Dance maybe wasn't as cool when we were young, but it's different now. It's a dance generation."

For a full list of winners, go to hiphopinternational.com.

Director Wolfgang Petersen, known for films including “Air Force One” and “The Perfect Storm,” has died at 81.

Petersen died Friday in Los Angeles, a representative said. He had been diagnosed with pancreatic ...Read More

The Oscar winner, 57, is joining the “Hunger Games” prequel as the villainous head game-maker Dr. Volumnia Gaul in “The Ballad of Songbirds and Snakes,” based on the ...Read More

A Martin Scorsese-directed documentary about singer-songwriter David Johansen and a movie about cannibalistic lovers headlined by Timothee Chalamet are...Read More

Director Wolfgang Petersen, known for films including “Air Force One” and “The Perfect Storm,” died Monday from pancreatic cancer at age 81.

The German-born Petersen was nominated for Oscars for best adapted ...Read More

Zach Braff and Florence Pugh ended their relationship earlier this year, the "Little Women" star has confirmed. And there's a reason we didn't know about it until now.

"We've been trying to do this separation without the ...Read More

DETROIT — The preteen years may be tough but 12-year-old Leah Jeffries is navigating an even harsher world these days and doing it with confidence: Hollywood.

The Novi native’s career is on a roll with a steady list ...Read More