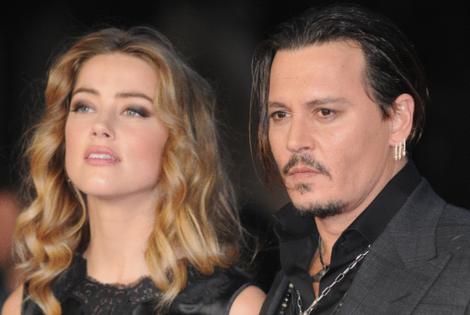 The actress told the Fairfax County Circuit Courthouse that Depp accused her friend of leaving human feces in their bed after he and Heard got into a fight following her 30th birthday party in April 2016.

Heard said their dog, Boo, had bowel issues and was known to relieve himself in their house, and sometimes in their bed. She told the seven-person jury that she wasn’t in the mood to prank Depp after he left their Los Angeles apartment following the argument.

“I don’t think that’s funny,” Heard said. “I don’t know what grown woman does. I was not, also, in a pranking mood. My life was falling apart. ... I had just been attacked on my 30th birthday by my violent husband, with whom I was desperately in love and knew I needed to leave. It was not really a jovial time, and I don’t think that’s funny, period. That’s disgusting.”

Heard claimed she and Depp had a disagreement the night before after he showed up late to her birthday party. She said their altercation included multiple shoving matches, and claimed Depp threw a bottle of champagne at her that smashed through a painting, before he chest-bumped her to the floor.

“He grabbed me by the pubic bone, pubic area,” Heard claimed. “As best I can describe it is he kind of just pushed me down, held me down by it, and kind of pulled me into it. He was asking me, kind of taunting me, asking me if I thought I was so f--king tough. ‘You think you’re such a f--king tough guy, huh? ... Tough like a man now?’ That happened for a bit of time.”

Heard, 36, says she tried to call a truce and asked Depp not to leave her on her birthday.

“He responded cruelly,” Heard claimed. “He told me that’s what I f--king deserve, and that I’d wake up alone and that no one would ever love of me.”

Heard said her best friend came over the next morning so they could travel together to the Coachella music festival in Indio, California. She said she “didn’t notice anything” in the bed, but said she’d left Boo and their other dog, Pistol, on it while she packed.

“(Boo) had eaten Johnny’s weed when she was a puppy and had bowel control issues for her entire life, among some other issues,” Heard claimed. “We regularly had to take her to the vet.”

Heard’s account of the incident Monday came nearly a month after Depp testified during the trial that he planned to retrieve items from the apartment following that April 2016 fight, but that someone at the home told him not to, and sent him a photo.

“It was a photograph of the bed, our bed, and on my side of the bed was human fecal matter, so I understood why it wasn’t a good time to go down there,” Depp said. “My initial response to that was, I mean, I laughed. It was so outside, it was so bizarre, and so grotesque that I could only laugh.”

The trial resumed Monday following a weeklong hiatus due to a judicial conference. The trial began in mid-April.

Depp, 58, is suing Heard for $50 million over a 2018 op-ed published by the Washington Post in which Heard described herself as “public figure representing domestic abuse.” She didn’t name Depp in the piece but had previously accused the actor of abuse, which he denies.

“It changes your life forever,” Heard said. “You never forget the first time someone hits you like that. I just had the date wrong.”

She continued, “I’m embarrassed to say, I think I would’ve liked to have believed that the period of time in which I had to fall in love with Johnny, in which we fell in love, and he was sober and he wasn’t violent to me, lasted a lot longer than it did. I think I would have liked to have believed that I wasn’t hit so early in the relationship and still stayed.”

Heard met Depp while making the 2011 film “The Rum Diary,” and married the three-time Oscar nominee in 2015. She filed for divorce in May 2016 and was granted a restraining order.

Choking back tears, Heard said Monday of her decision to file for divorce, “I knew if I didn’t, I’d likely not literally survive.”

During her three days of testimony, Heard accused Depp of multiple incidents of physical violence, including claiming he sexually assaulted her with a vodka bottle in Australia in 2015. On Monday, Heard’s lawyer shared multiple photos appearing to show Heard with a bruised face, which the actress claims were taken after Depp struck her with a phone.

She repeatedly spoke about Depp’s alleged struggles with sobriety, and claimed Depp hallucinated toward the end of their marriage.

Depp said during his testimony last month that he never abused Heard and accused her of often being physically violent toward him.