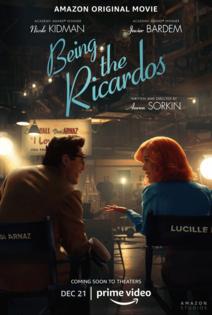 For the better part of six astoundingly successful seasons, Lucy and Ricky Ricardo's apartment was one of the most comforting places in America. I should say apartments; for a few years they lived on the fourth floor of a Manhattan brownstone, only to move into bigger, brighter third-floor digs in preparation for the arrival of their baby son. You never knew what Lucy, Ricky, Fred and Ethel were going to get up to in those spaces: quarrels and sing-alongs, bridge games and food fights, ridiculous stunts that would leave the living room strewn with trash, pillow feathers and even barnyard animals. The more, the merrier: For millions of viewers and the many more who grew up on reruns, the Ricardos' home was home.

You see that home often in the glibly entertaining behind-the-scenes drama "Being the Ricardos," mostly in the background of the Desilu Productions soundstage where Lucille Ball (Nicole Kidman) and her husband, Desi Arnaz (Javier Bardem), spend hours each day rehearsing, blocking and recording their smash-hit series. That living-room set beckons to Lucy and sometimes even taunts her, an image of the idyllic domestic bliss that she and Desi enacted on camera but never achieved in real life. It's an effective if reductive conceit, which more or less describes "Being the Ricardos," one of those pleasantly tidy biographical fantasias that aim to compress something remarkable — a life, a career, a cultural phenomenon — into the space of one revealing week.

As weeks go, it's a stressful one, set to the crisp rhythms of Alan Baumgarten's editing and the rapid percussion solos of Daniel Pemberton's score. It's the fall of 1953, and the House Un-American Activities Committee has recently questioned Lucy about a resurfaced 1936 voter-registration affadavit in which she had identified herself as a member of the Communist Party. The Hollywood blacklist is in full effect and the nervous suits at Desilu and Philip Morris, the tobacco giant that sponsors the show, are eager to quash the story before it makes headlines, prompting some intense crisis management from Lucy and Desi as they struggle to keep their show afloat and get their story straight.

Speaking of getting a story straight: While "Being the Ricardos" is many things — a eulogy for a doomed showbiz marriage, a mixed bag of actorly impersonations, a chance to hear Bardem sing "Babalu" — it is, first and foremost, the latest hyper-articulate history lesson written and directed by Aaron Sorkin. Which means, of course, that it's no more interested in sticking to the truth than Lucy is in staying out of Ricky's nightclub act. The HUAC scandal hit around the time of a "Lucy" episode called "The Girls Go Into Business," much of which takes place in a dress shop; Sorkin, with a flick of his pen, has switched to an earlier, superior episode, "Fred and Ethel Fight" (1952), which better serves his narrative purposes and keeps the action rooted in the Ricardos' apartment. (For the record: While that episode was shot in Apartment 4A, the window-and-piano setup we see on-screen are clearly from their third-floor pad.)

The "I Love Lucy" purist, in other words, will find plenty of things to quibble with. The casting of Kidman might be one of them. Since "Being the Ricardos" was announced earlier this year, much of the critical chatter has focused on the dubious physical resemblance between actor and subject, and the question of whether a bright red head of hair would be enough to transform Kidman into the most gorgeously expressive of screwball comedians, someone whose darting eyes, sheepish winces and spider-face grimaces ("lgggghhhhh!") have forged their own funnywoman lexicon. To these eyes — which, by a conservative estimate, have imbibed roughly 5,000 hours of "I Love Lucy" reruns — the answer was and still is pretty clearly no.

How much it matters is another story. The Kidman we see on-screen is no more or less plausible a fit for Lucille Ball than, say, Renee Zellweger is for Judy Garland or Michael Fassbender is for "Steve Jobs," to cite an earlier Sorkin-scripted bio-fantasia. As with those star turns, the illusion seizes hold in fits and starts, but you're fortunately in the hands of an actor with more to recommend her than strict verisimilitude. Kidman may not have Lucy's astonishing comedic range (who does?), but she does have an assured gait, a sly wit and a hands-in-the-pockets casualness that lets you know she means business, but charmingly so. Her secret weapon may be her voice, which Kidman bends into a nicely husky approximation of Ball's raspy lower register and raises to a higher pitch when she's acting. (It's no accident that Lucy and Desi's first scene is a heated argument in which their faces and bodies have been awkwardly cropped out of the frame, as if to focus our attention on their voices.)

The problem — or, depending on your perspective, the pleasure — is that even as Kidman does her utmost to sound like Lucy, Lucy seems to be doing her utmost to sound like Sorkin. It's not the worst fit: You can easily believe that Lucille Ball always had a snappy rejoinder at the ready, and maybe even a tortured metaphor or two. The same could be said for a lot of the other whip-smart cynics in her midst, including her co-stars William Frawley (J.K. Simmons, rumpled and nearly perfect) and Vivian Vance (Nina Arianda, solid if a bit too sharp), the former vaudevillians who played Fred and Ethel, and whose mutual loathing became the stuff of legend. If anything, their vitriol feels soft-pedaled here. ("Where'd you dig up that bitch?" Frawley was fond of asking Arnaz whenever Vance set him off.)

The controlled chaos of a TV production is, of course, a native habitat for the creative force behind "Sports Night," "Studio 60 on the Sunset Strip" and "The Newsroom," and so it's no surprise that the "Lucy" creative brain trust of Jess Oppenheimer (a sympathetic Tony Hale), Madelyn Pugh (a witty Alia Shawkat) and Bob Carroll Jr. (Jake Lacy) are also fluent in Sorkin-speak. The one character here who escapes those signature rat-a-tat rhythms is Desi, which is refreshing to a point, though it doesn't begin to compensate for how unpersuasive Bardem is in the role. Seductive bedroom eyes and lovely singing aside, nothing about Bardem's low voice or blocky physique begin to suggest Arnaz's slender, boyish charm — or his own deft comic timing, with a gift for bug-eyed reaction shots that sometimes out-bugged his wife's.

What does come through in Kidman and Bardem's scenes is a strong sense of the Lucy-Desi creative alliance. Their marriage may be on life support — Lucy suspects, quite rightly, that Desi is banging more than his conga drum — but their professional devotion to each other never wavers, even in the face of doubting, naysaying superiors. Amid too many dull, expository flashbacks to their earlier days — their first meeting on the set of the 1940 musical "Too Many Girls," their musings over the direction of Lucy's ill-fated movie career at RKO Pictures — there's one irresistible scene in which Lucy agrees to do "I Love Lucy" for CBS, but only if they also cast her Cuban band-leader husband. A few years later, Desi will make the show even more of a representational trailblazer when he insists that Lucy's off-screen pregnancy be written into the show.

Lucy promotes her husband relentlessly, reminding everyone that he's the show's emotional glue, its artistic and financial mastermind. Desi, for his part, pours himself into a series built entirely around the star qualities of the woman he loves, however imperfectly. That makes "Being the Ricardos" a uniquely fascinating opus for Sorkin, who's often been dinged for celebrating male blowhards at the expense of his underdeveloped female characters (though his strongest directorial effort, "Molly's Game," remains a smart exception). But here, happily, he doesn't give Desi too much mansplainin' to do. Instead he gives Kidman the appreciably meaty role of a woman whose consummate perfectionism and professional drive did their part to turn an industry on its head, sometimes at the expense of her colleagues' egos.