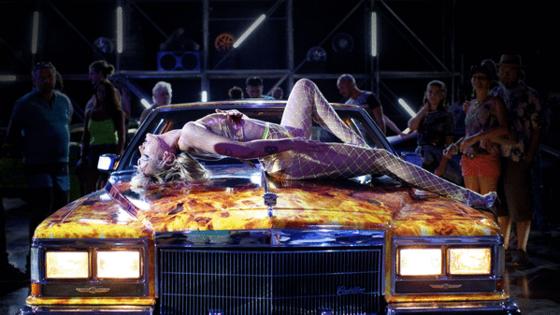 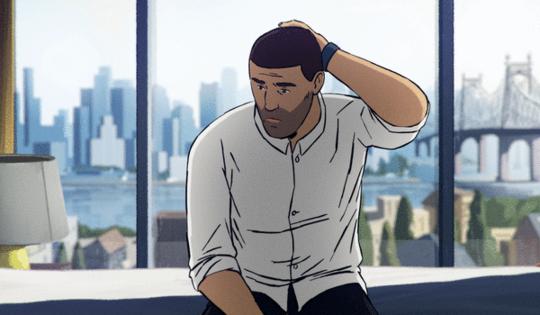 Somewhere around the 20-minute mark of "Titane," Julia Ducournau's astonishing (and I don't use that word lightly), Palme d'Or-winning horror film, I was flashing back to all the times my colleague Justin Chang and I lamented the loss of moviegoing last year.

I was at the Landmark in West Los Angeles, and the woman sitting behind me had spent pretty much every minute of the movie either freaking out (oh, no she didn't just do that, TELL ME she didn't just do that!) or asking the guy sitting next to her to explain what the hell just happened. (And he was all too happy to oblige.)

By the time the movie ended, the couple sitting next to me had climbed over three rows of seats, attempting to get out of earshot. Me? I was paralyzed, half-delighted by the energy in the theater (my neighbor wasn't the only person having a visceral reaction to Ducournau's provocations and lead actor Agathe Rousselle's ferocity) and half-annoyed for not fleeing to a quieter section myself.

A few days later, I saw Ryusuke Hamaguchi's 2-hour, 59-minute drama "Drive My Car" in a packed screening room, no one talking, no one moving, no one daring to make a sound for the duration. That's how completely transfixed we were by the movie's unfolding mysteries. It's almost comical to say that a movie in which the opening credits drop at the 40-minute mark is too short, but everyone I know who has seen "Drive My Car" has come away, if not wanting more, then intent on seeing it again.

But when it comes to international offerings this year, who has time to see a movie more than once? Academy members on the international feature film committee face an annual viewing crunch, and any voter who has tried to be diligent and plow through some of the hundred or so films available for viewing on the academy's screening platform knows all too well the limitations of time.

With the best picture Oscar race back to a fixed field of 10 nominees, academy members should be looking farther afield, starting with Pedro Almodovar's "Parallel Mothers," which Spain bypassed as its entry for the international Oscar because A) it can't nominate every Almodovar film (I guess) and B) because the movie it submitted, "The Good Boss," is an agreeable (if slick) corporate satire that features Javier Bardem in the leading role.

Spain's loss should be the best picture slate's gain. "Parallel Mothers" is a twisty, tender drama starring Penelope Cruz as a woman on the verge of a nervous breakdown after she makes a shocking discovery not long after giving birth. Once again, Almodovar is exploring his fascination with the maternal instinct within the boundaries of melodrama, but "Parallel Mothers" also delves into the pain of his country's past. Anchored by a raw, radiant turn from a never-better Cruz (actors branch voters should take notice), "Parallel Mothers" checks every best picture box you can name.

Cruz isn't the only Oscar-worthy woman leading a terrific contender. Renate Reinsve won the lead actress prize at Cannes for Joachim Trier's "The Worst Person in the World," Norway's Oscar entry. It's one of the best movies I've ever seen dealing with the confusion and excitement of being young and not having a clue about what to do with your life. It's also a bittersweet romantic comedy possessing a clear-eyed honesty about love and the struggle to find identity, with a weird, wonderful and sharply observant Reinsve at its center.

Scandinavia hasn't been represented in the lead actress category since the days of Liv Ullman and Ingrid Bergman in the '70s. And a Norwegian woman has never been nominated. Beklager, good people of Norway. We promise to work on that, starting with Reinsve.

Look in every corner of the world, and there's something of interest, including Iranian auteur Asghar Farhadi's latest nuanced social drama, "A Hero," and "Memoria," Apichatpong Weerasethakul's dreamy reckoning with Colombia's past, starring Tilda Swinton. There's also the heartbreaking coming-of-age story "Prayers for the Stolen" from Tatiana Huezo (Mexico's entry) and Danish filmmaker Jonas Poher Rasmussen's poetic animated film "Flee," a refugee story that figures to be a force in both the international and documentary categories, and maybe even animated feature as well.

These are all films that will prompt conversations — hopefully conducted after the movie, not during it — and the sort of contemplation that great art produces. Their memory lingers. When I told filmmaker Paul Thomas Anderson about my "Titane" experience, he offered a reaction that mirrored the kind of fervent discussions I heard leaving the Landmark that night.

"I walked out having no idea what I had just seen or whether I enjoyed it or not and then, cut, days later, 'Yeah, no, I think I loved that,'" Anderson said, smiling. "That's a great movie."