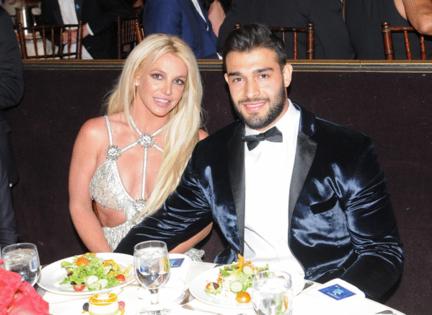 Sam Asghari, her fiance, posted video Wednesday on his Instagram Stories showing him on a private plane delivering a cake baked in the shape of a “B,” its three layers topped with pink and red roses dusted with glitter.

Macarons were also nestled in, along with a white chocolate heart embossed with the words “Happy Birthday Britney.”

Spears was delighted: “Oh my God,” she cooed in the video, “it’s beautiful B! Oh my God! Thank you so much.”

As he sang the most challenging parts of the “Happy Birthday” song, Asghari urged everybody listening to “cover your ears,” prompting giggles from the birthday girl.

“Baby, this is hot. This is so nice,” Spears said. Strawberries dipped in white chocolate and a bouquet of flowers — “not from me,” Asghari said — accompanied the cake.

It’s apparently all part of Spears’ plans, announced in mid-November, to celebrate “my freedom and my B day for the next two months.” The singer was released from her conservatorship Nov. 12, ending nearly 14 years of control by her father and others.

Another court hearing is planned for Dec. 9, presumably to tie up loose ends and financial concerns.

Videos from several hours after the pop star’s flight showed fireworks blasting off on an unknown beach, one that might not be Spears’ typical destination of Maui. Spears hinted Wednesday that she was headed somewhere foreign rather than domestic, declaring in an Instagram post, “God thank you for being able to go out of the country !!!! I am blessed !!!!”

The singer also posted video of herself and Asghari posing as they boarded that private jet. Shown wearing short-shorts and knee-high, high-heeled red boots, Spears wrote, “Oh the precious joy today !!! Me and my fiance are so excited to be going away …. as you can see I’m not 800 pounds like the paps have me in pics ... I’ve been working out and it’s real … whatever ... !!!!”

Happy birthday, Britney — wherever you are.