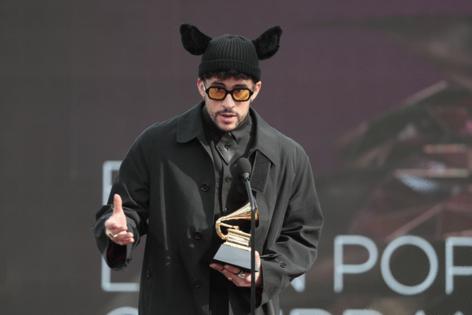 Bad Bunny hopped to the top of Spotify’s most-streamed list yet again.

The Puerto Rican rapper led all artists worldwide with more than 9.1 billion streams on the music service in 2021, Spotify announced Wednesday.

The company didn’t release every individual performer’s streaming totals, but said Bad Bunny’s lofty number of listens was enough to surpass Taylor Swift, who finished second on the global ranking.

It’s the second year in a row that Bad Bunny, whose hits include “Mia” and “La Cancion,” has led all artists in Spotify streams.

Making the feat more impressive is that Bad Bunny didn’t come out with a new album in 2021, though he did release hit songs with “Volví” and “Yonaguni.”

The third-through-fifth most-streamed artists in the world this year were BTS, Drake and Justin Bieber, respectively.

Drake was Spotify’s most-streamed artist in the United States, followed by Swift and the late rapper Juice WRLD. Bad Bunny finished fifth in the U.S. ranking.

Another top performer in 2021 was Olivia Rodrigo, whose hit “Drivers License” was the most-streamed song both globally and in the U.S. The song, which was the pop star’s debut single, garnered more than 1.1 billion streams this year.

Rodrigo’s “Good 4 U,” meanwhile, finished second on the U.S. list, and fourth globally. Both songs appeared on the 18-year-old Rodrigo’s debut album, “Sour,” which came out in May.

“The Joe Rogan Experience” was the year’s most-streamed podcast on Spotify, both in the U.S. and globally.