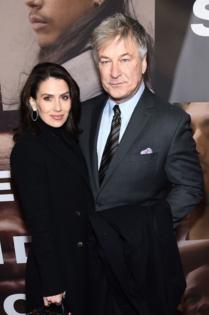 Hilaria Baldwin, wife of “Rust” actor and producer Alec Baldwin, expressed her support Monday for her husband and for the family of Halyna Hutchins, the cinematographer who was fatally shot Thursday on the set of the low-budget film, which was filming in New Mexico.

“My heart is with Halyna. Her husband. Her son. Their family and loved ones,” the mother of six wrote on Instagram. “And my Alec.”

“It’s said, ‘There are no words’ because it’s impossible to express the shock and heartache of such a tragic accident,” she continued. “Heartbreak. Loss. Support.”

Celebs including Katie Couric and Melanie Griffith responded with supportive comments. “Sending love,” Rosie O’Donnell wrote. “Our hearts are broken along with yours,” Leslie Jordan commented.

When the accident occurred, Alec Baldwin was rehearsing a scene in which he pulled a revolver from its holster and aimed it toward the camera, according to a Santa Fe County, New Mexico, sheriff’s detective’s affidavit used to obtain a search warrant. The second time he tried it, the gun fired, hitting Hutchins and director Joel Souza, who were huddled around a monitor setting up a shot.

Souza was treated at a Santa Fe hospital and survived; Hutchins was pronounced dead after being airlifted to the University of New Mexico Hospital in Albuquerque. Hours before the shooting, members of the camera crew had walked off the set in protest of working conditions and safety concerns.

The actor had been told he was handed a “cold gun,” indicating the gun was not loaded. However, a cardinal rule of gun safety is to always keep a firearm pointed in a safe direction.

Alec Baldwin addressed the tragedy on social media with a series of tweets posted Friday.

“There are no words to convey my shock and sadness regarding the tragic accident that took the life of Halyna Hutchins, a wife, mother and deeply admired colleague of ours,” he wrote.

“I’m fully cooperating with the police investigation to address how this tragedy occurred and I am in touch with her husband, offering my support to him and his family,” he added.

The actor was seen Saturday at a hotel in Santa Fe, the New York Post reported, having breakfast with and consoling Matt Hutchins and Hutchins’ 9-year-old son.

Dr. Mehmet Oz’s announcement that he is running for the Republican nomination for Pennsylvania’s open U.S. Senate seat means his talk show will be off the air in several major TV markets.

A representative for Fox ...Read More