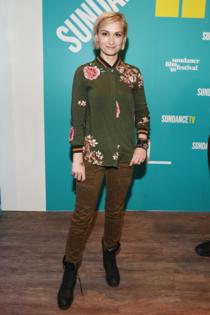 While it is unclear what type of gun was used in the accident, a deeper look into how firearms used onscreen by characters are handled safely by actors, prop masters and weapons handlers on film and TV productions offers some clues.

Depending on the project’s budget, time constraints and narrative needs, gun use onscreen is depicted in numerous ways. Nonoperational replicas — made of wood, plastic or rubber — are regularly used for scenes filmed at a distance. For closer-range frames, gunfire can be mimicked with the use of Airsoft guns and electric charge guns, said a person familiar with handling props and weapons on sets. Visual and sound effects like muzzle flashes, flying shell casings and loud gunfire sounds can be added in postproduction.

“There is no fathomable reason to use blanks anymore when it costs like 50 cents to add gunfire in post and even less reason to use them during a day scene where there is little to no interactive light,” Oscar-nominated cinematographer Rachel Morrison said in an Instagram Story post. “If you don’t have enough funding to make a film safely, you shouldn’t be making it. No shot, no scene, and no movie is worth the loss of life.”

Still, productions regularly use operational firearms, arguably to add realism to the scene and authenticity to an actor’s performance. When an operational firearm is used on set, a licensed armorer or a prop master is responsible for monitoring every step of its use: loading and unloading the weapon, checking the barrel to avoid any issue with materials left inside after every take, showing its status to actors and assistant directors, instructing actors on its proper use — the latter to maintain the story’s realism as well as everyone’s safety.

Additionally, the armorer or a stunt coordinator ensures that no cast or crew member is in a firing lane, or the path of the weapon, when it is fired, said Michael Lubke, a fight director and stunt coordinator for theater and movies. Anyone in close range usually is required to wear protective items such as shields or safety glasses. “No human should ever be in the firing lane,” Lubke said.

The systems currently in place work well when followed. “Absent some sort of defect on the gun itself or the cartridge misfiring or something like that, there is literally no way this can happen if the people in charge are following safety protocols that have been drafted and in effect for years related to firearms on a set,” said Jeff Harris, an attorney who has represented the families of people who have died on film and TV sets.

“The problem is when people get complacent and don’t follow the systems, then that’s when we have these accidents on movie sets,” he continued. “It’s just unfortunate that we have to have these kinds of things occur before people really say. ‘You know what, we’ve got to follow these written policies and we have to do it to a T. Otherwise, one mistake, somebody dies.’”

Current filming regulations only require such armorers on set for certain types of weapons. For example, California productions are not required to staff an armorer when filming involves a revolver or semi-automatic weapons. In these cases, a prop master is tasked with renting the weapon, which requires an entertainment firearms permit with the state of California. That prop master also is tasked with the proper handling of the weapon on set.

Some people in the prop industry said they would prefer that trained firearms specialists be required on all sets with any kind of potentially dangerous weapon, as prop-handling union members also must oversee all the other props in the production and are only required to attend a one-time weapons safety class. Others would like to see increased safety requirements for California state permits to rent prop guns, saying all that is needed to do so is a background check.