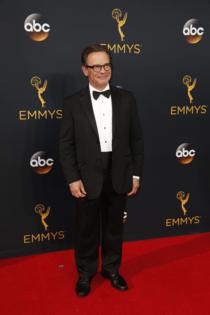 Peter Scolari, the prolific actor who rose to fame on the TV show “Bosom Buddies” with longtime friend Tom Hanks and was nominated for three Emmy Awards for his role on “Newhart,” died Friday. He was 66.

Scolari, who also starred in Hanks’ films “That Thing You Do!” (1996) and “The Polar Express” (2004), died after battling cancer for two years, his spokeswoman, Ellen Lubin Sanitsky, told the Los Angeles Times. She did not specify what kind of cancer Scolari had.

From 1984 to 1990, Scolari played pretentious but likable TV producer Michael Harris on Bob Newhart’s beloved CBS sitcom. Although he repeatedly missed out on the supporting actor Emmy for the role, Scolari ultimately won the award in 2016 for his guest role on Lena Dunham’s HBO comedy “Girls.” Scolari played Hannah Horvath’s father, Tad, and became the first actor to win an Emmy as a “replacement nominee” when “Veep” actor Peter MacNicol was disqualified over a technicality.

“The only thing that matched his love for his family and his passion for acting was his love of being in service to others,” his wife, Tracy Shayne, said in a statement provided by Sanitsky.

The New York-bred actor got his start in theater and spent seven years at the prestigious Colonnades Theatre Lab alongside Danny DeVito, Rhea Perlman and Jeff Goldblum.

“We were planning on becoming the national theater,” he told the L.A. Times in 1991. He was a self-taught student of vaudeville, a professional juggler and an accomplished college athlete.

He also starred in the short-lived sitcoms “Family Album,” “Dweebs” and the “Honey, I Shrunk the Kids: The TV Show,” and did voice work for several animated children’s series such as “Gargoyles,” “Pinky and the Brain” and “Batman.”

He and Hanks remained dear friends since their early days on the ABC comedy “Bosom Buddies,” in which they played cross-dressing ad men who moved into an all-female apartment after their building was condemned. Scolari relocated to L.A. from New York for the part.