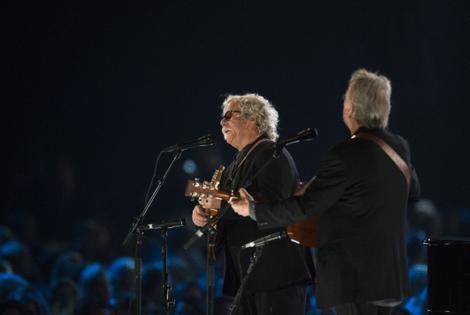 SAN DIEGO — Rock & Roll Hall of Fame inductee Chris Hillman of The Byrds was just 17 when he first performed at the Bostonia Ballroom in 1963 as a member of the San Diego band The Scottsville Squirrel Barkers. But he remembers that concert at the historic El Cajon venue as if it was almost younger than yesterday, not 58 years ago.

"The Bostonia Ballroom was the big game in town for country and bluegrass music, and playing there was a gate swinging open," said Hillman, 76, who helped pioneer country-rock as a member of The Byrds and Flying Burrito Brothers.

"I don't think I had an awareness of just how significant the Bostonia was at the time" he noted. "It was only later on that I came to realize how important it was."

Hillman is not alone in that realization.

"The Bostonia Ballroom was the Grand Ole Opry of the Southwest," said RosaLea Schiavone, 73, who as a girl often attended weekend shows there with her parents. "If you were a performer who hit the Bostonia, you had hit the big time."

During the 1950s and 1960s, the venue hosted performances by Hank Williams, Patsy Cline, Johnny Cash, Jerry Lee Lewis, Roy Orbison, Carl Perkins, Charley Pride, Merle Haggard and a host of other legends and legends-to-be. They are just some of the reasons this storied El Cajon concert venue might be worthy of a book or film documentary, or — perhaps — historical landmark designation.

Either way, the Bostonia's legacy will be celebrated Saturday at an all-ages concert in the 1,500-capacity ballroom. For the past 20 years, it has operated as the Royal Palace Banquet Hall and is now in escrow for new ownership.

Saturday's multi-act show is being billed as both a tribute and a revival, if at least for one day. It will be headlined by Western Swing music champion Deke Dickerson, whose birth in 1968 came four decades after the ballroom was built in 1932.

The venue stands at the corner of Bostonia Street and Broadway. It is in an El Cajon neighborhood that was settled in the 1800s by former Massachusetts residents. They named the area Bostonia.