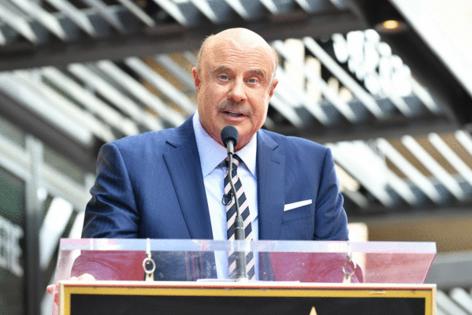 LOS ANGELES — A woman who alleges she was sexually assaulted at a Utah ranch is suing Phil McGraw and ViacomCBS for negligence, claiming that the popular TV doctor recommended she be treated at the facility on the day she appeared on his show.

In a lawsuit filed this week in Los Angeles County Superior Court, Hannah Archuleta seeks unspecified damages for the harm she said she allegedly suffered in Utah after an appearance with her parents on the "Dr. Phil" show in October 2019, when she was 17. The show is produced on the Paramount Pictures lot in Hollywood.

According to the lawsuit, McGraw and staff members of his show allegedly pressured the family to immediately send Archuleta to Turn-About Ranch in Escalante, Utah, for treatment. The complaint says she had been suffering suicidal thoughts when her family reached out for help from McGraw, whom the suit notes is not licensed to practice psychology (he holds a doctorate in clinical psychology).

"Dr. Phil said that, 'Hannah needs to go to the Ranch to have any chance at a good life,'" and that the matter was serious enough for his show "'to help her right now and today,'" the lawsuit states. The show's staff promised that McGraw "was personally invested" in the Archuleta family and that he would continue to help them, the complaint alleges.

On the day of the taping, the show's staff allegedly arranged for a medical service to whisk Hannah Archuleta from the Paramount soundstage on Melrose Avenue to the airport for the trip to the rural cattle ranch, which is billed on its website as a place where troubled teens can pull their lives together through hard work and therapy. At Turn-About Ranch, teens can learn "leadership, teamwork, accountability, and responsibility .. in a real-world environment," its website said.

The lawsuit, handled by famed victims' attorney Gloria Allred, said the "Dr. Phil" show volunteered to "pay expenses for everything, including car rental and air fare, meals, and lodging for Hannah."

Within weeks, Archuleta had allegedly been groped twice by an unnamed male staff member at the ranch, according to the lawsuit.

Archuleta wrote letters to her family in Colorado, seeking help. Her father, Tony, traveled to Utah, pulled her from the program and filed a report with the local sheriff's office, the lawsuit states. A representative of the Garfield County Sheriff's Office confirmed the December 2019 report.

Hannah Archuleta further states that the "Dr. Phil" show did not advise her family of incidents that had allegedly occurred at the ranch, including the 2016 killing of a camp counselor by a troubled teenager.

"Hannah and her parents turned to Dr. Phil and defendants because the defendants held themselves out as qualified and capable to help people in distress," said the lawsuit, which asks for a jury trial.