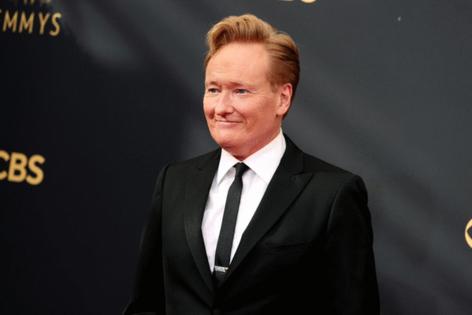 The “Conan” host’s TBS show went off the air in June and was in its final year of eligibility during this year’s ceremony. But the comedian’s losses apparently turned him into an unfiltered awards-show heckler that we all wanted to sit near during the show.

O’Brien demanded plenty of camera time during the telecast — and his playful outbursts didn’t appear to be planned.

Even John Oliver, whose “Last Week Tonight” won the variety talk series category yet again, was rooting for the veteran host to win. When he didn’t, Oliver humbly “shared” his award with O’Brien.

“I think like many of us in this room, I was kind of rooting for Conan,” Oliver said. “So this is bittersweet. Thank you so much, Conan, for 30 years of inspiring comedy writers.”

That’s when the cameras panned to O’Brien in the audience who feigned acceptance, only to be cut down by Oliver onstage. One of Oliver’s writers, who was seated near O’Brien, offered to share her writing trophy with the veteran comic.

Later in the telecast, O’Brien shouted continuously ahead of the onstage address given by Television Academy Chairman and CEO Frank Scherma. While Scherma tried to start his speech, O’Brien encouraged everyone to stand up and give the president a standing ovation.

During much of Scherma’s remarks, O’Brien was seen respectfully standing and saluting, which made the obligatory awards-show moment much more entertaining.

O’Brien ultimately made his way to the stage, but it wasn’t for a win. The former “Saturday Night Live” writer crashed Stephen Colbert’s acceptance speech for live variety special — even though he had nothing to do with “The Late Show” host’s winning “Election Night 2020" special.