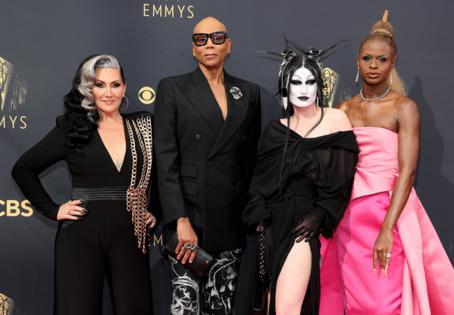 “Condragulations” are in order for RuPaul, whose legacy now includes making Emmys herstory.

VH1’s “RuPaul’s Drag Race” was named the top competition program at the 2021 Emmys on Sunday, which means executive producer and host RuPaul Charles is now the most-awarded Black artist in Emmys history with 11 career wins.

“It does mean something to me,” RuPaul has said previously about the possibility of hitting this milestone. “I have all the scars to show you from a career in show business ... It’s been a long, hard road, but I have enjoyed every minute of it. I dig being creative and music and colors and shapes and the laughter from people and discovering something really beautiful in these contestants, every season. So, the history sort of means other people are keeping track of things.”

The world’s most famous drag queen, RuPaul has hosted “RuPaul’s Drag Race” — where he appears both in and out of drag — since its 2009 premiere. This is the fourth consecutive competition program Emmy win for “RuPaul’s Drag Race,” which sees a field of drag queen contestants draw on their charisma, uniqueness, nerve and talent in weekly challenges as they compete for a cash prize and a crown.

RuPaul tied the previous record of 10 career Emmys, held by cinematographer Donald A. Morgan, during last weekend’s Creative Arts Emmys, when he won as host for “RuPaul’s Drag Race” and executive producer of the aftershow “RuPaul’s Drag Race Untucked.” This marked RuPaul’s sixth consecutive win in the host for a reality or competition series category, as well as the first win ever for the “Drag Race” companion series “Untucked” for unstructured reality program.

With his six wins for hosting the long-running drag queen competition series, RuPaul remains the winningest host since the category was established in 2008. “RuPaul’s Drag Race” also won 2021 Emmys for its editing, casting and directing.