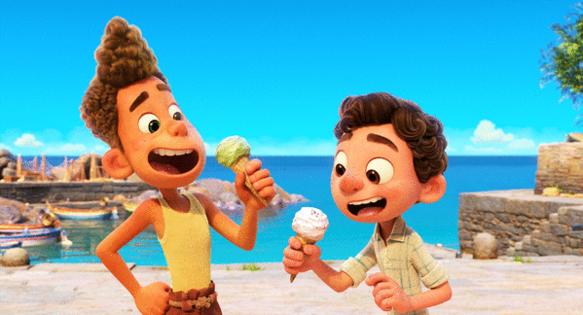 Stop me if you’ve heard this one before: a young, magical sea creature, heard of only in fairy tales and sailor’s legends, dreams of life beyond the surface, on land, and takes a leap to explore the world beyond the safety of their brightly jewel-toned underwater world. You may be thinking that this sounds a lot like “The Little Mermaid,” and indeed, Pixar’s new film, “Luca” is very much like that iconic animated Disney film. It’s like “The Little Mermaid” with boys, but Prince Eric has been replaced with a Vespa scooter.

“Luca,” streaming Friday on Disney+, is another one of Pixar’s wondrous and warm creations; a fantastical tale that’s deeply rooted in human emotion and quandary. Though it would have been delightful on the big screen, at home, kids and parents alike will enjoy this fishy tale of tolerance. Directed by Enrico Casarosa, written by Jesse Andrews and Mike Jones, the film is set in and around a picturesque coastal Italian fishing village called Portorosso, and reflects the kind of idyllic life one dreams of in a place like this: pasta, gelato and quaint town squares. But people who make their living from the sea are ruled by legend and superstition, and the townspeople have a healthy fear of sea monsters from the deep, depicted frequently in their local artwork.

Fear comes from what we don’t understand, what we don’t know, and these townspeople have never met a sea monster until the friendly, curious and determined Luca (Jacob Tremblay) comes along. Young Luca dreams of exploring beyond his watery kingdom, having heard that the sea monsters can shape-shift into human form on dry land. He befriends another young sea monster, Alberto (Jack Dylan Grazer) living the land-lubber’s life, and soon the two best friends are dreaming of exploring the world via Vespa, living a life of freedom (as long as it doesn’t rain).

Posing as visitors from another village, the boys befriend a young girl, Giulia (Emma Berman), who takes them under her wing, and the trio begin training for a local race, in order to win the cash to purchase a rusty old Vespa. Thanks to their secret identity, mischief and misunderstandings arise. Luca and Alberto represent two different approaches to their outsider status: Luca wants to reveal and assimilate, while Alberto believes he’ll never be accepted and chooses the rebellious life instead.

Designed in gloriously rich oceanic hues, the animation of “Luca” is a visual delight. The character design, in particular the mustaches on the fathers, are especially characteristic and expressive. Interspersed with midcentury Italian pop tunes is a truly special score by Dan Romer. The composer of the film scores for “Beasts of the Southern Wild” and “Wendy,” Romer’s music brings his signature propulsive rhythm and plaintive strings, offering a sense of poignancy to Luca’s plight. What Luca wants is the freedom, not to hit the open road on a Vespa, but to live honestly, to pursue all of his interests, to learn and grow. Everyone, even sea monsters, deserves that.