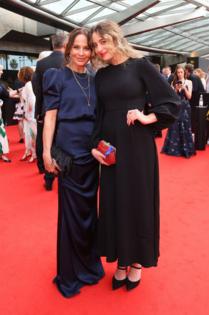 The CW is taking an old adage — “If you want something done right, do it yourself” — to a global level.

“The Republic of Sarah,” which premiered Monday, shows how history teacher Sarah Cooper turns an idyllic New Hampshire town into its own country to save it from a ruinous mining company.

Though the citizens of Greylock are surprisingly willing to overthrow the United States, the revolt is not without bumps — some personal, some involving windmills.

“There’s an element of fantasy where this small town comes together and fights for this thing and falls in line behind this 25-year-old high school teacher,” Stella Baker, who plays Sarah, told the Daily News.

Like “The Society” and “The Wilds” before it, “The Republic of Sarah” builds from the ground up — new laws, energy supply, education system. Greylock’s new government aims to right the wrongs of 250 years of its predecessors.

But Sarah also struggles with the town’s interpersonal dynamics: the emerging factions among the townspeople, between residents and outsiders and even the changes inside her own family, including the return of long-lost brother Danny (Luke Mitchell), who works for the company trying to tear the town apart.

“She ends up hurting people closest to her and we watch her struggle having to make decisions for the whole town that sort of alienate her from her community.”

That’s a lot to ask of a young woman who just weeks earlier was teaching teenagers about settlers, a fact that isn’t lost on “The Republic of Sarah.” No one is more aware of Sarah’s own imperfections than Sarah herself. Sarah has all the markings of a young idealist, but rarely those of a hardened politician. It’s a little like watching a baby giraffe find its footing — but with an entire community depending on the outcome.

Sarah feels she has no choice but to break free, and creating her own country is the only way she can think of to save the town that raised her.

“On the one hand, it’s about the value of protecting your community and the value of community itself and the power of a group of people fighting for something on a grassroots level,” Baker told The News.

“On the other hand, it’s about what it means to be a leader and the sacrifices of having to make decisions for other people. The experience of trying to do your best to take care of all of these people that you care about.”