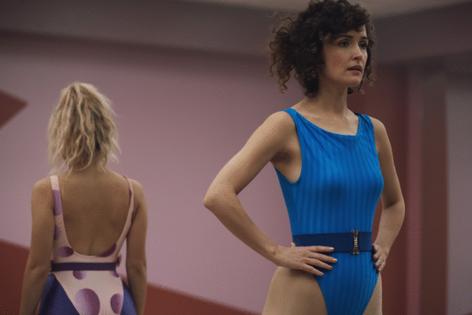 When Rose Byrne was playing a tormented '80s aerobics instructor in the Apple TV+ series "Physical" — a role that required her to radiate despair while marching it out in leg warmers and a barely there leotard — she tried to remember something Susan Sarandon once told her about "Thelma & Louise."

"She said she was so focused on all the driving she had to do that she didn't have time to do so much acting," Byrne said recently. "It became a lesson in how, with the focus required for a task like driving — or, in my case, aerobics — it's impossible to be as self-conscious in our performance. Even in my extremely tight leotard."

In the dramedy, set near San Diego in 1981, Byrne stars as Sheila Rubin, a former Berkeley activist turned disillusioned housewife who can hardly tolerate her boorish husband, Danny (Rory Scovel), a washed-up radical and failed academic who decides to run for local office using all her ideas.

She is also battling a private but all-consuming eating disorder that seemingly warps her every thought, which we hear in a running voiceover. ("You're nothing. You're a ghost. A fat ghost," Sheila tells herself at one point.) Salvation arrives in the form of an aerobics class at the nearby mall. Sheila begins teaching, then decides to make her own workout video, viewing it as an opportunity for both financial gain and personal fulfillment.

"Sheila doesn't know how to articulate it, but she wants a seat at the table. She is trying to harness this ambition while harboring secret, terrible shame, and a destructive illness," said Byrne, speaking by phone from Sydney, Australia, where she is staying with her partner, Bobby Cannavale, and their two children.

The actress said she related to Sheila's harshly critical inner voice: "Women can be incredibly self-destructive in what we do to ourselves and to our bodies, and I don't think that's what's represented enough in the stories I see."

Though it features stoned surfer dudes and many scenes at the mall food court, "Physical" is more than a nostalgic romp through the '80s. Creator Annie Weisman drew inspiration from her childhood in the beachside community of Del Mar, California, and a silent, yearslong struggle with an eating disorder. The goal, she said, was to get past the sunny cliches and "to reflect more of the darkness that I experienced in my life as a Southern California native."

Byrne was uniquely able to capture this complexity, Weisman said. "I have seen her in many different roles that are wildly different — comedic, dark. But in this role, I think you see her doing all of those things at the same time. It was thrilling to get to see her layer the performance in one character."

Byrne's versatility has been fully on display over the last 18 months. She starred opposite Cannavale in a modern staging of the Greek tragedy "Medea" that closed days before the pandemic shut down theaters across the country in March 2020.

Then she appeared as iconic feminist Gloria Steinem in "Mrs. America," the FX limited series about the Equal Rights Amendment, which ended with Ronald Reagan's election in 1980 and "strangely felt like a companion piece" to "Physical," she says.