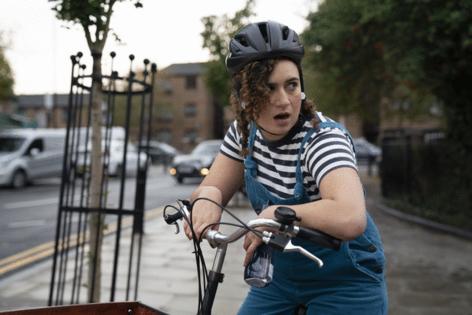 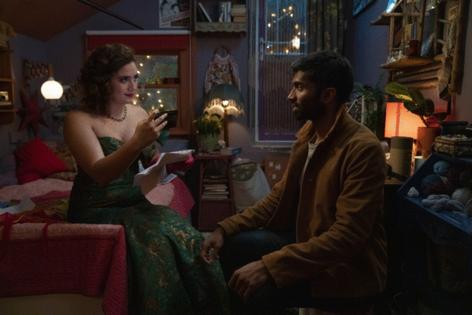 Most struggling 20-somethings aren’t traveling in the same circles as movie stars, but that’s the premise that kicks off “Starstruck,” the new rom-com series on HBO Max from comedian Rose Matafeo. She plays Jessie, a young woman in London who is dragged out to a nightclub one New Year’s Eve where she meets, and ultimately spends the night with, a handsome guy named Tom (Nikesh Patel). It’s only the next morning, when she pads down to his kitchen for a drink of water, that she spots a film poster with his mug squarely on it and realizes who he is.

“Tom Kapoor is a famous actor, and you’re a little rat nobody,” her roommate (Emma Sidi) sweetly informs her later that day. “Harsh, but it’s true,” Jessie replies, and she’s not insulted or offended. In fact, she’s laughing at the absurdity of it all: “I am forever a stain on his sexual history!” She has no illusions that this was anything more than a one-time affair, but the spark was strong, and they end up meeting again and again.

“Starstruck” is a breezy watch, thanks to Matafeo, both as a writer and a performer. A well-known comedian in her native New Zealand and more recently in the U.K., this is my introduction to her talents, and they are unmistakable. She’s loaded with style and charisma, and the character she’s created for the show is goofy but also confident and sex positive in ways female protagonists rarely are in romantic comedies. And she has a bouncy way with a one-liner. “Here’s the best bit,” she tells her roomie about that first liaison: “Two hours later, I got my period. Like, what is that? Touched by an angel!” (Matafeo co-wrote the series with Alice Snedden; a second season in the works.)

Inevitably, Jessie and Tom’s budding relationship runs into a few carefully placed narrative obstacles, and this is where you see the faint outlines of some of the show’s predecessors, from “Notting Hill” to “Bridget Jones’s Diary.” That’s not a complaint, just a happy observation. It also emulates a more recent entry: Aidy Bryant’s “Shrill” on Hulu, which premiered its third and final season earlier this year. The contrast between these two shows is instructive, because “Shrill” portrays its central friendship between roommates as more than just a high jinks generator or a repository for the main character’s anxieties. “Starstruck” wrestles with that challenge less successfully; the show is ultimately a vehicle for Matafeo, but better developed supporting characters wouldn’t detract from that. Quite the opposite, actually.

It’s enormous fun as long as you don’t squint and think too deeply about the plotting itself. It would have been intriguing to see Jessie contemplate her own privacy concerns, but lookie-loos with their camera phones, forever complicating the lives of famous people in public? A nonissue. Social media is conspicuously absent, as well.

Do I wish that Tom (or “Tom Famous” as Jessie hilariously IDs him on her phone) was written to be more complex than the somewhat bland, near-perfect human whose biggest flaws are a low-level dissatisfaction with his career and an inability to pursue Jessie a bit more straightforwardly? Yes! There’s also the subtle idea that Tom (or perhaps his semi-charmed existence) is dangled as some kind of answer to the malaise Jessie is battling as she stares down the end of her 20s.

She’s so wonderfully brazen initially — walking home after a hookup with an entirely different guy, she literally dances down the street as if she were in a movie musical, still high on the adrenaline rush of sex with no strings attached — and then abruptly, somewhere during the season, she just isn’t. I think we’re being asked to fill in too many gaps here: That she’s blissfully unimpressed with celebrity, but falling for Tom (and the mixed signals she’s getting in response) has brought out all her insecurities. I’m just not sure “Starstruck” does enough groundwork to fully get us there. When Jessie finally does give voice to those feelings, it’s such an about face from the woman we first met; it needs more of a lead-up and follow-through.

The real estate is a head-scratcher as well, and it’s not like “Starstruck” is alone in this, but we’re meant to believe Jesse is somehow able to afford living in London — one of the most expensive cities in the world — on what she ekes out as a part-time nanny and a movie-theater employee.This seems unlikely!

Even so, there’s so much to like here. Realistic for the character or not, her surroundings (including the wonderful arched ceilings of the movie-theater lobby) are eye-catching in a way that has you sinking back into the couch with a sigh. Her wardrobe is delightful (like “Shrill,” the show puts its lead in a gorgeous rainbow-striped sequined dress, and in both cases it’s a costuming choice that looks incredible on camera). The banter is quote-worthy: “You can’t fire me, I Star-Is-Borned you,” Tom’s agent (a cameo appearance by Minnie Driver) tells him. But more than anything, Jessie is a character you can get behind, fueled by a chaotic nature and light romantic comedy fizziness that makes the show as bingeable as they come.

Where to watch: Debuted Thursday on HBO Max