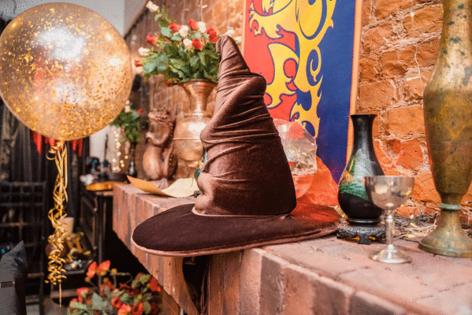 Summer marks a time for many high school graduation parties. But there’s nothing that says freshman, sophomores and juniors can’t have their own slice of celebration, too. After all, don’t some of our cinematic and streaming series favorites depict the singing, dancing and teen angst worthy of jubilation? Pick one of these seven movie/TV-themed ideas to praise the perfectly imperfect stage your teen happens to be in, whether it’s graduation, moving up a grade or getting ready to begin their high school journey.

Unarguably one of the most iconic high school movies of the '80s, “The Breakfast Club” has one of the most memorable closing scenes set to Simple Minds' “Don't You (Forget About Me).”

While this generation of teens has a host of online outlets to remain connected and help them reflect, you can help create an even more memorable catalog of their high school years. Create a collection of printouts asking your graduate’s friends their favorite things about your offspring and each other. As an example, ask what the most memorable group event was; the funniest friend moment; what they love most about each other; etc. Once forms are complete, take a picture of each on your phone. Compile them into a digital file and send them to each person as a takeaway memento for the next part of their journey (or be very old school and print them into booklets).

Making its debut in 1999, the modern adaptation of Shakespeare's “The Taming of the Shrew,” “10 Things I Hate About You” has hung around as a lasting hit. Among its more memorable moments are the spicy paintball scene between Heath Ledger’s and Julia Stiles’ characters (be still our hearts), Patrick’s bleacher serenade to Kat and who can forget the prom — where Joey “eat me” Donner gets punched in the face?

Re-create any these moments for your post-school soiree. Organize a paintball session; hold a mini-prom do-over or even a karaoke event.

“You've got the vocabulary of a baked potato.” (“Riverdale”)

From wildly strange murders and live role-playing games gone terribly wrong (Gryphons and Gargoyles) to faked deaths and teen-organ harvesting (the Farm), there are no shortages of entertaining moments in "Riverdale."

For your “Riverdale” fan’s summer party, however, you may want to explore some of the lighter sides of the show, such as decor featuring the Riverdale River Vixens, Southside Serpents and Pop’s diner. Display favorite portraits of Archie, Jughead, Betty, Veronica, Cheryl and other characters from the show and have partygoers vote for their favorite. Or invite guests to vote which high-schooler’s personality most resembles specific "Riverdale" characters. Winners get a prize pack filled with “Riverdale” merch (you can get a $4.95 Sticker/Craft combo on Amazon.com).

One of the unique aspects of the “Harry Potter” movie franchise is being able to watch Harry, Hermoine, Ron and friends grow up in front of our very own eyes. The transformation from round-faced wizardlings to full-blown wizards and witches lends itself well to a high school party.

While showcasing a timeline of your own magical student’s journey in snapshots, there are loads of additional themes to pull from the Potterverse. Feature quotes like the famously circulated “Leviosa” meme above and other favorites like “mischief managed” and “I did my waiting! Four years of it!” throughout the party venue. If budget and time don’t permit an infamously lengthy table of Hogwarts’ treats, pretzel-and-cheese broomsticks or chocolate-dipped pretzel wands will do (see Pinterest) — especially if they’re served with a side of Butterbeer.

“We’re all in this together.” (“High School Musical”)

Are we suggesting you host a full-scale musical for your summer-breaker and their friends this summer? No! I mean, unless you want to!

What you can do instead, for a generation of “High School Musical” fans, is host a pool or backyard party, complete with a projector screening of the movies. Decorate using East High’s red, white and black colors. If your “class” is up for it (and not incomprehensibly embarrassed by the suggestion), split guests into groups to compete a choreographed routine to “We’re all in this together.” Winner gets their own karaoke machine?

“Rotten to the Core.” (“Descendants”)

In keeping with Disney’s popular school-aged musicals, “Descendants” has become another fan-favorite, with its kitschy and catchy tunes like “Rotten to the Core,” and “Evil Like Me.”

With a built-in sugar and spice theme, showcasing the naughty and nice sides of iconic Disney favorite’s offspring like Maleficent's daughter, Mal, provides a perfect foundation for food and activity ideas. Pair tasty sweet treats like cinnamon spice cupcakes (check out the recipe at Shugarysweets.com) with Food Network’s Ultimate Spicy Nachos courtesy of Aaron Mccargo Jr. (FoodNetwork.com). For a bit of fun, gather “naughty and nice” toddler facts from student’s/graduate’s parents/caregivers. Then, share them with the party and see if guests can guess who the naughty or nice stories belong to (ex: “This toddler used to steal candy from older siblings and place them behind the piano; guess who?").

The generation of “Karate Kid” watchers and newer "Cobra Kai" enthusiasts can unite in a one-day, martial-arts extravaganza, celebrating students of all ages. If finances permit, consider hiring a martial arts instructor to showcase some of the more simplistic and beginner forms, movements or techniques of their school. To honor karate’s Japanese origins, consider serving sushi, sashimi and ramen. Design a selfie station, where “students” can capture favorite "Cobra Kai" moments and fight scenes.

July 4 is the No. 1 day for cooking out in the United States, according to the Hearth, Patio and Barbecue Association. So someone near and dear has probably already been tasked with buying charcoal or making sure the ...Read More