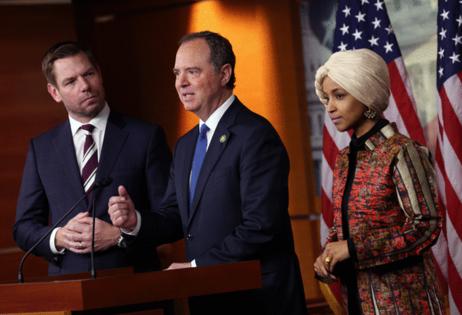 McCarthy, who narrowly won the speakership earlier this month, has long promised to keep Omar from one of her prized committee slots. He maintained that threat after Republicans won the House, citing in a tweet "her repeated anti-semitic and anti-American remarks."

Omar isn't alone in being targeted by McCarthy. The speaker followed through on another pledge when he tweeted Tuesday that he had rejected the attempt by Democrats to keep California representatives Adam Schiff and Eric Swalwell on the House Intelligence Committee.

At a news conference Wednesday alongside Schiff and Swalwell, Omar said McCarthy is seeking revenge and attempting to appease former President Donald Trump.

"Kevin McCarthy's purely partisan move to strip us from our committee is not only a political stunt, but also a blow to the integrity of our democratic institution and threat to our national security," Omar said.

But keeping Omar off the foreign affairs panel is a different logistical hurdle that is expected to require a full vote of the House.

"I do believe that when and if this vote comes, it will be a moment of clarity," Omar said. "And I hope that many of these Republicans will have conscience and will not prove to their constituents and the American people just how much of partisan hacks they are, how much hypocrisy that they have and show themselves to be a disgrace."

Omar also told reporters that she didn't know if a vote against her would succeed or fail at this point. She served on the Foreign Affairs Committee during her first two terms while Democrats controlled the House.

The action was taken against Georgia Republican Rep. Marjorie Taylor Greene after Democrats pointed to her violent rhetoric and embrace of conspiracy theories. Months later, Arizona GOP Rep. Paul Gosar lost committee assignments after an animated video of him killing Democratic Rep. Alexandria Ocasio-Cortez with a sword was posted to his social media.