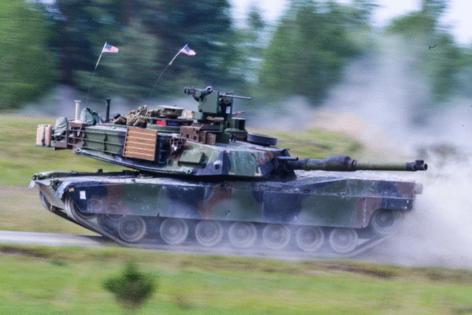 WASHINGTON — Putting aside resistance from the Pentagon and elsewhere, the Biden administration is planning to announce a decision to send Abrams M1 tanks to Ukraine, officials said Tuesday.

The tanks, long sought by Ukrainian President Volodymyr Zelenskyy, would provide the heaviest weaponry yet among the billions of dollars in military aid Washington has sent to Ukraine to help repel a brutal Russian invasion.

But given the sophistication, complexity and firepower of the tanks, it could be months or even more than a year before they reach the battlefield and Ukrainian fighters are trained to use the equipment.

Pentagon spokesman Brig. Gen. Pat Ryder, in a nod to objections from Defense Department officials, said the Abrams tank was a major asset in combat, but not one that is easy to operate.

"And so, like anything that we're providing to Ukraine, we want to ensure that they have the ability to maintain it, sustain it, to train on it."

He emphasized he was not announcing a decision to supply the tanks "at this time," an official position repeated at the White House and State Department.

As recently as last week, Colin Kahl, the undersecretary for defense policy, said the Pentagon was not prepared to send Abrams tanks to Ukraine, saying that in addition to the difficulty maneuvering them, the machines have gas-guzzling jet engines that are expensive to fuel.

Pentagon leadership, he told reporters, "has been very focused on ... not providing the Ukrainians systems they can't repair, they can't sustain, and that they, over the long term, can't afford, because it's not helpful."

But U.S. officials are also keen to send a political message to Germany, which has been reluctant to provide its own Leopard 2 battle tanks to Ukraine unless the U.S. also offers tanks.