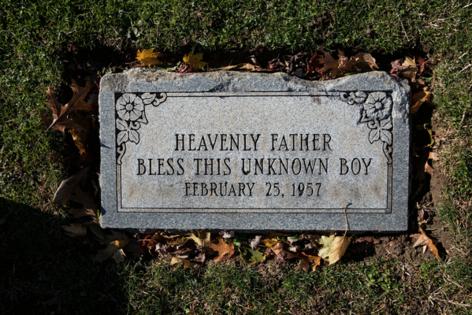 PHILADELPHIA — More than six decades after the badly bruised body of a young boy was found in a cardboard box in Philadelphia’s Fox Chase section, police Thursday announced the long-sought identity of the boy — finally naming “America’s Unknown Child” and providing some closure in what police say is one of the city’s most enduring unsolved homicides.

Long-known as the “Boy in the Box,” Joseph Augustus Zarelli was newly 4 years old when he was found in a bassinet box in the rural Northeast Philadelphia field in February of 1957, police said. He likely died from blunt force trauma, Philadelphia Police Homicide Captain Jason Smith said.

For decades, investigators tried to uncover Zarelli’s mysterious identity with little luck, canvassing the city with fliers of his face, scouring local orphanages, and even distributing pictures of the boy’s clothed body posed in a chair in hopes of jogging someone’s memory.

After exhuming the boy’s remains in 2019 to extract new DNA, investigators were able to use modern forensic genetic genealogy methods to locate and contact possible relatives on the boy’s mother’s side.

From there, Smith said, detectives uncovered the identity of Zarelli’s birth mother, using that information to obtain the family’s birth records. They pulled three birth certificates belonging to the family — two for the boy’s siblings and one for a name they had never before seen: Joseph Augustus Zarelli, born on Jan. 13, 1953.

Both parents of the boy are deceased, Smith said, declining to elaborate on where Zarelli’s living family members reside “out of respect to them and their parents.”

While Smith said investigators have their “suspicions” as to who may be responsible for Zarelli’s death, the case remains an active criminal investigation. A missing persons report was never filed for the boy, police said.

The “extraordinary” announcement, Police Commissioner Danielle Outlaw said, “only closes one chapter in this little boy’s story, while opening up a new one” as police now investigate who may have been responsible for the boy’s death.

“In his very short life, it was apparent that this child experienced horrors that no one no one should ever be subjected to,” Outlaw said. “When people think about the boy in the box, a profound sadness is felt. Not just because the child was murdered, but because his entire identity and his rightful claim to own his existence was taken away.”