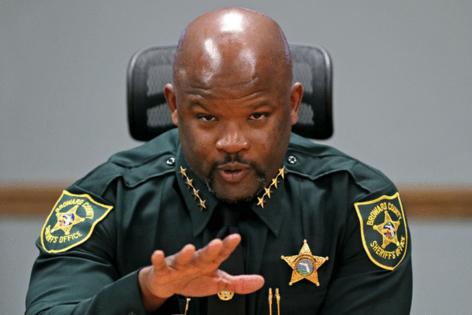 Broward Sheriff Gregory Tony must now decide whether to fight a decision by a state ethics panel — which for the second time in recent months agreed that further review is warranted to look into accusations he gave false information on official forms, his attorney said Monday.

The Florida Commission on Ethics, with an 8-1 vote, found probable cause Friday to pursue a case into the sheriff’s providing false information, or not disclosing information.

The action came in a closed-door confidential hearing, the results of which are expected to be made public Wednesday. Louis Jean-Baptiste, the sheriff’s attorney based in Tallahassee, said Monday that Tony has not decided yet on their next move. Jean-Baptiste said he will “talk to the sheriff, figure out what’s the next course of action.”

This was the second time the ethics commission found probable cause to pursue a case against Tony.

Although the issues considered are the same, the first hearing was a referral from the Florida Department of Law Enforcement, a case that was heard in September. This last hearing was the result of a complaint from a citizen.

In September, the ethics commission found Tony “misused his public position” when he provided false information or did not disclose information, determining that the “extraordinary relevant set of facts” that he omitted directly benefited him in getting jobs.

Tony now has two options on these cases: He can choose to go to a full evidentiary hearing before a judge with the Florida Division of Administrative Hearings. Or he could immediately enter into a stipulated agreement.

Either way, the findings go back to the Commission on Ethics for its approval. And the result could be a recommendation that the governor remove him, a public censure, or a civil penalty as much as $10,000 per allegation.

A recommendation by the ethics commission to remove somebody from office or their public position is rare. It has only happened six times since 1975. The most recent case was in October when the commission took final action on a complaint against Escambia County Commissioner Douglas Underhill, who had admitted guilt in failing to disclose gifts related to his legal defense fund.