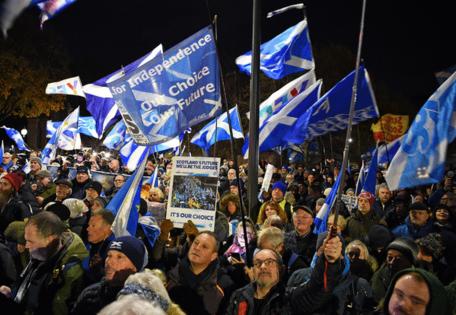 EDINBURGH, Scotland — The U.K.’s top judges threw out an attempt by the Scottish government to bypass Westminster and call a second independence referendum, thwarting nationalist leader Nicola Sturgeon’s plan for a vote next year.

The Supreme Court was asked by Scotland’s top legal adviser to assess whether the Scottish Parliament had the power to legislate unilaterally for a consultative referendum. The London-based court ruled unanimously that a vote would need to be approved by the U.K. government, as it was when Scotland held a previous referendum in 2014.

“The Scottish Parliament does not have the power to legislate for a referendum on Scottish independence,” Judge Robert Reed said in his summary of the judgment at a hearing on Wednesday. “Even if the referendum has no immediate legal consequences, it would be a political event with important political consequences,” the court ruled.

The decision will come as a relief for Prime Minister Rishi Sunak as he tries to restore investor confidence in the U.K. Like his predecessors, Sunak has said he wouldn’t grant permission for another referendum on Scotland’s three-centuries-old union with England and Wales.

Sturgeon says her nation is being denied a democratic right after Scotland voted against Brexit and her Scottish National Party continued to triumph in subsequent elections. She said the court ruling shows the U.K. isn’t a voluntary partnership of nations and vowed to find another route to a legal referendum.

At a sometimes tense news conference in Edinburgh, the SNP leader reiterated her plan now is to turn the next U.K. general election into a de facto referendum on independence and will consult with experts on how that might work.

Admitting the ruling was a “hard pill to swallow” for her supporters, she said it “raised deeply uncomfortable questions” over the future of a U.K. where the will of its constituent nations is ignored. “The more contempt the Westminster establishment shows for Scottish democracy, the more certain it is that Scotland will vote ‘yes’ when the choice does come to be made,” she said.

The pound held onto earlier gains, trading around $1.192. Currency analysts had warned of volatility if the court ruled in favor of the Scottish government.

She has been under pressure from factions of her party keen to force the issue of a vote on breaking away from the rest of the U.K. She became SNP leader and Scottish first minister in 2014 in the wake of the last independence vote, in which Scots chose 55% to 45% to remain in the U.K.

Since then, she’s built her party into a formidable electoral machine and it still appears unassailable in Scotland. Sturgeon said her SNP will renew its campaign to assert its defense of democracy and will hold a special party conference in the new year to discuss and agree the detail of the proposed de facto referendum.

Recently, opposition parties have been attacking Sturgeon for the state of health care in Scotland, planned strike action by teachers on Thursday and a scandal over the procurement of ferries. Sturgeon blames the governing Conservative Party’s stewardship of Brexit and the economy for the U.K.’s malaise.

“People in Scotland want both their governments to be concentrating all attention and resources on the issues that matter most to them,” Alister Jack, the secretary for Scotland in the U.K. government, said by email after the ruling.

—With assistance from Greg Ritchie and Kitty Donaldson.