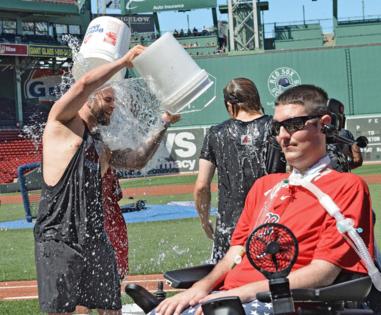 BOSTON — Eight years after the ALS Ice Bucket Challenge went viral across social media and raised hundreds of millions of dollars for research, a Cambridge company is on the brink of a major breakthrough for ALS patients.

Amylyx Pharmaceuticals should receive word in the coming week from the U.S. Food and Drug Administration on whether the feds will approve the local firm’s drug treatment for the relentlessly progressive and fatal neurodegenerative disorder Amyotrophic Lateral Sclerosis, or ALS.

AMX0035, which has already been approved in Canada, is the first treatment funded by ALS Ice Bucket Challenge donations that’s being considered for approval by the FDA.

“If not for the Ice Bucket Challenge, we wouldn’t be here,” Justin Klee, co-CEO and co-founder of Amylyx, told the Herald.

If approved by the FDA, Amylyx’s drug would be a significant development for the ALS community, which has few treatment options. About 30,000 people in the U.S. have ALS, according to estimates.

The company’s drug in trials showed that it can slow the disease’s progression and help patients survive longer.

“It’s the first time we’ve seen a benefit on both function and survival in the same drug in the same trial, which is I think why people are really excited,” Klee said.

Data from the company’s trial of AMX0035 showed that the drug slowed down disease progression by at least 25%, and increased lifespan by several months.

“Our trial showed a statistically significant slowing in the rate of disease progression,” said Josh Cohen, co-CEO and co-founder of Amylyx. “People progressed about 25% slower when they were on the drug as compared to placebo.

“We also saw that people who were on the drug survived longer than those who were taking the placebo, as well,” he added. “We saw a benefit on both function and survival.”