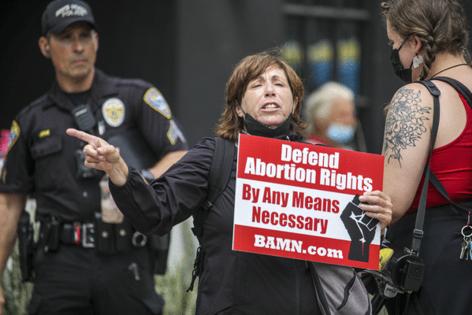 SACRAMENTO, Calif. — California voters will decide whether to reinforce the state's abortion protections under Proposition 1, a measure that is expected to drive voters to the polls this November. And that was the whole point, opponents say.

The state's Democratic-controlled Legislature placed Proposition 1 on the ballot in response to the U.S. Supreme Court's decision to overturn Roe v. Wade, with lawmakers arguing that the ruling made it clear Californians need a safety net for their own reproductive rights. The meagerly funded opposition campaign argues that the measure is simply a ploy by Democratic lawmakers to latch onto a hot-button issue that will motivate liberal voters still reeling from the ruling.

The measure, which has a significant lead in a recent opinion poll, follows a tidal wave of politically polarized reactions across the country, as conservative states have instituted abortion bans and liberal states have pushed to increase access. Gov. Gavin Newsom is expected to sign more than a dozen abortion bills passed by the Legislature this year after including $200 million in the state budget to expand reproductive services, including for out-of-state residents now unable to obtain reproductive care.

"California will not back down from the fight to protect abortion rights as more than half the states in this country, enabled by the Supreme Court, ban or severely restrict access," Newsom said after Proposition 1 was placed on the ballot. "We are ensuring Californians will have the opportunity this November to enshrine the right to choose in our state Constitution."

The state's Constitution currently guarantees a person's right to privacy, but does not define what that right includes. The California Supreme Court found the right to privacy included decisions related to reproductive choice, including whether to have an abortion or use birth control. Lawmakers have also added abortion rights into state law, but supporters of Proposition 1 said hostile attacks on abortion access have convinced them those aren't enough. Laws and court rulings can be changed, supporters say.

Proposition 1 would ensure abortion protections couldn't be changed without voters weighing in. However, opponents of the measure have argued that the language of Proposition 1 is overly broad and does not limit when abortions can be performed.

Lawmakers placed the measure on the ballot by approving Senate Constitutional Amendment 10, which was authored by Senate President Pro Tem Toni Atkins, a San Diego Democrat. It passed the Senate and Assembly with two-thirds approval in each house. Most bills require only a simple majority.

Atkins said the measure would make it "undeniably clear that in California, abortion and contraception are health care and are a private matter between a patient and their medical provider."

"I have seen what is at stake when people don't have access to abortion — the real lives and real families that are at risk," Atkins said. "In California, we are resolute in our determination to protect women and families, no matter who happens to be wielding power at the federal level."