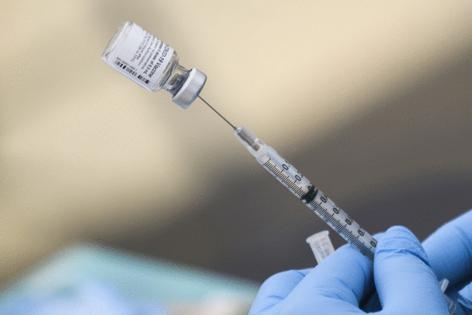 WASHINGTON — President Joe Biden’s administration has slashed its target for COVID-19 vaccine donations abroad this year, amending a contract with Pfizer Inc. in the latest sign that world demand for the shots has collapsed.

Under the revised deal, a total of 600 million Pfizer doses will be made available to the U.S. by the end of the year, giving the administration more time to find countries who want them. Pfizer had originally agreed to sell a billion shots at cost by this month.

More than 450 million Pfizer doses have so far been donated.

Biden had doubled the U.S. order for shots from Pfizer to 1 billion a year ago for the purpose of donating them abroad and addressing early inequities in COVID-19 vaccine access. But falling demand meant the U.S. would not have been able to administer those shots.

Under the revised terms, Pfizer will deliver 600 million doses for donation by the end of this year and the government has an option to order more shots, up to the remaining 400 million doses, according to a U.S. official speaking on condition of anonymity.

The U.S. said it’s working closely with Covax and other nations to distribute as many doses as possible, the U.S. official said.

Pfizer said it was committed to fulfilling the 1 billion-dose order. It said it has enough supply to fulfill the order but agreed to change the timeline.

“We are seeing reduced demand in some low- and lower-middle-income countries due to barriers in administration and vaccine hesitancy,” the company said in a statement. “As a result, Pfizer and the U.S. Government have agreed to revise the terms of this contract to allow more time to address vaccination barriers.”

None of the 600 million will expire before the end of the year, and much of it will be available until spring, the U.S. official said.

It’s not clear what, if any, financial terms were changed. The original deal was for what Pfizer called a “not-for-profit price.” A U.S. government document obtained by Bloomberg listed the price of the 1 billion vaccines as $6.9 billion.

Biden pledged to donate a total of 1.2 billion doses. So far, the U.S. has shipped about 622 million of those, according to State Department data, with shipments slowing.

The effort is also being throttled by an ongoing funding shortfall. The administration’s requests to Congress for more money for its COVID-19 response, including programs to boost uptake and cut barriers abroad, have so far been rebuffed.