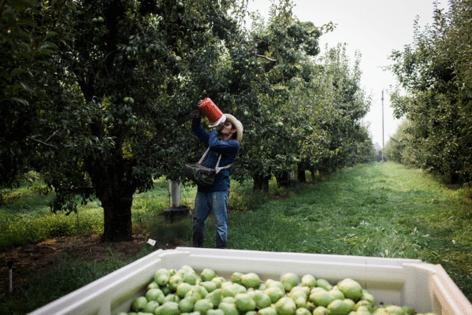 PORTLAND, Ore. — When a record-breaking heat wave settled over the Pacific Northwest in late July, it didn't take long for high temperatures to test the effectiveness of new state safety rules aimed at addressing the effects of climate change on both indoor and outdoor workers.

As temperatures exceeded 95 degrees Fahrenheit for more than a week in Portland and shot even higher in other parts of the state, people who work outside experienced "a bit of a mixed bag," said Reyna Lopez, executive director of PCUN, a farmworker's union that represents thousands of agricultural workers in Oregon's Willamette Valley.

"We heard some folks were following the rules, and they were getting water and additional breaks," Lopez said. "But we were hearing a lot of mixed reviews around the shade structures and having shade available to workers, especially folks that were in kind of more remote places."

The Oregon rules requiring rest breaks and water and shade access, which took effect June 15, are among the strictest guidelines in the nation for worker safety in the heat, both indoors and out. A separate rule addresses exposure to wildfire smoke. With workers now undergoing mandatory training and state inspectors beginning enforcement, the Oregon standards may serve as a test case as a handful of other states and the federal government slowly develop rules amid industry pushback.

Beyond the West Coast, though, there are limited safety rules for workers facing extreme heat, even as climate change has worsened conditions for many people who labor outdoors. Minnesota has heat safety rules for indoor workers, and heat safety regulations are pending for workers in both Maryland and Nevada. But just 21 states have separate agencies overseeing workplace safety; most states rely on the federal Occupational Safety and Health Administration, known as OSHA, which does not have nationwide safety standards to protect workers from heat exposure.

More than 130 labor and environmental organizations, led by the nonprofit advocacy group Public Citizen, have called on OSHA to issue emergency rules. The Biden administration in 2021 directed the federal agency to develop workplace regulations for heat exposure, but that process takes on average seven years to implement and could be stalled if the next occupant of the White House is less open to such rules.

U.S. Rep. Judy Chu, a California Democrat, also has sponsored legislation to force OSHA to adopt a workplace heat standard within two years. The bill has been heard in the House Education and Labor Committee.

Nationwide, though, there's considerable industry opposition to proposed state and federal rules, particularly among agricultural and forestry interests. Many industry groups argue that federal regulators should avoid sweeping rules and instead, take into consideration regional temperature and humidity differences, worker acclimatization to the heat and other factors that may vary by state and season.

Regulators also should acknowledge that employers often have little control over the health conditions of some workers or choices they make outside the workplace that may result in them being "unfit for physical labor upon arriving at work," the American Farm Bureau Federation's vice president of public affairs argued in comments on the proposed national rules.