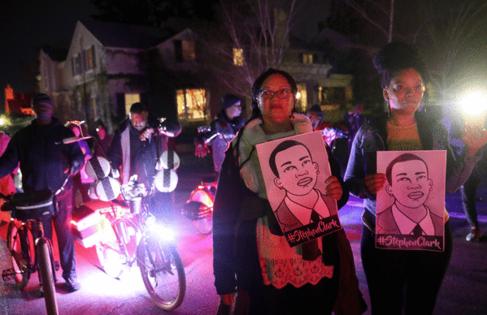 SACRAMENTO, Calif. — The city of Sacramento on Friday announced it had agreed to pay Stephon Clark’s parents $1.7 million, which settles the final remaining portion of a federal civil rights lawsuit filed by his family after police shot to death the unarmed Black man in March 2018.

In a 2019 settlement, the city agreed to pay $2.4 million to Clark’s two children. A later court ruling left his parents as the sole remaining plaintiffs in the lawsuit. The agreed-upon payment by the city’s insurer to Clark’s parents ends the family’s legal action against the city.

“The decision to resolve the case through a negotiated agreement comes after careful consideration of all options,” City Attorney Susana Alcala-Wood said in a news release. “We believe this is the best path forward for all involved parties including our community.”

The shooting occurred after Officers Terrence Mercadel and Jared Robinet chased Clark on the night of March 18, 2018, in the Meadowview neighborhood of south Sacramento. Police had received reports of someone breaking car windows in the area.

The Sacramento Police Department said Clark ignored officers’ commands to stop and fled into the backyard of his grandparents’ home. The officers followed and fired 20 shots after he turned toward them with what they later said they believed was a handgun, according to police. The item turned out to be a cellphone.

Clark’s death was one of the most controversial police shootings in Sacramento history. The shooting was followed by huge protests in Sacramento and marches in New York and other cities nationwide.

“Stephon Clark’s death was a tragedy that brought pain and sorrow to his family and to our entire city,” Mayor Darrell Steinberg said in Friday’s news release. “Everyone wishes this heartbreaking event had not occurred. A family lost a son, a grandson, a brother, and a father.”

The city released the officers’ body camera videos, as well as helicopter footage that created widespread concern among community activists over why deadly force was necessary and why officers fired 20 shots at Clark.

“The fact that the officers acted within the law does not diminish the tragedy of what occurred,” Alcala-Wood said in the news release. “This case has led our city to implement meaningful improvements to policy, and it will continue to do so.”

Numerous reforms at the Sacramento Police Department were later implemented to curb the use of force. The changes include updates to the Police Department’s body-camera and foot-pursuit policies, along with the development of a comprehensive use-of-force policy.

The Sacramento City Council in June 2021 adopted a new use of deadly force policy for police with language proposed by the Sacramento Community Police Review Commission, a citizen panel tasked with overseeing public safety policies. The adopted policy reads: “A peace officer is justified in using deadly force upon another person only as a last resort when reasonable alternatives have been exhausted or are not feasible and the officer reasonably believes, based on the totality of the circumstances, that such force is necessary.”

Clark’s death also contributed to the passage in 2019 of a landmark state law that that aims to better regulate when officers use deadly force.

The family initially sought $20 million from a lawsuit filed in federal court in Sacramento. The payment for Clark’s sons was set to be placed in trust accounts for the boys, ages 5 and 2 at the time of the settlement, and paid to them in three tax-free payments between the ages of 22 and 25.