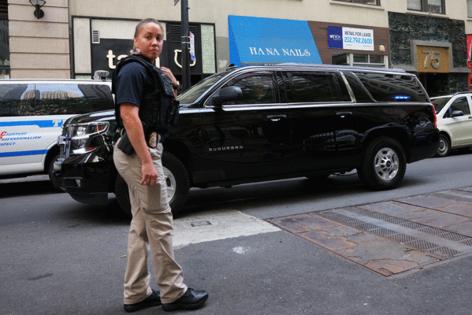 “Under the advice of my counsel ... I declined to answer the questions under the rights and privileges afforded to every citizen under the United States Constitution,” the former Manhattan mogul said in a statement after invoking his Fifth Amendment rights.

“This is a vindictive and and self-serving expedition, the likes of which this country has never seen before,” he continued. “The United States Constitution exists for this very purpose, and I will use it to the fullest to defend myself against this malicious attack.”

Trump’s embrace of the Fifth Amendment did not mark the end of the Q&A session, which was expected to last all day. One possible factor in his decision to stay mute was New York Attorney General Letitia James’s collegial relationship with the Manhattan district attorney’ office, which continues a parallel criminal probe into Trump’s business practices.

The ex-commander-in-chief’s lawyers alleged in May that James was improperly trying to question Trump in a bid to gather information for the DA’s office.

Trump, along with his children Ivanka Trump and Donald Trump Jr., had earlier fought a February order by Manhattan Supreme Court Justice Arthur Engoron requiring they sit for questioning under oath as part of James’ probe of the Trump Organization.

But an appeals court ruled in May that Trump, along with his kids, needed to sit for questioning. The sessions were delayed by the sudden death of Trump’s first wife Ivana last month.

Trump, during his 2016 presidential campaign, pointedly questioned people who invoked the protection: “The Mob takes the Fifth. If you’re innocent, why are you taking the Fifth Amendment?” And even as the hearing continued, so did Trump’s email solicitation of donations from his supporters.

“I urgently need your help,” read the latest Trump appeal. “Joe Biden and the radical Left are working OVERTIME this month.”

Trump, in a Tuesday post on his Truth Social account, once again blasted the investigation led by James.