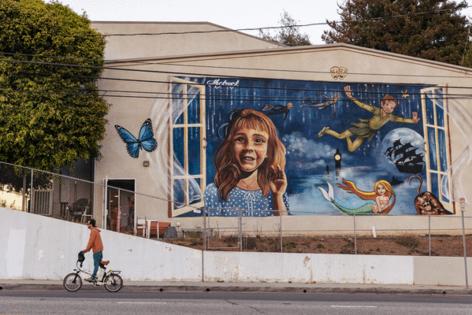 But ever since their 12-year-old daughter died in an e-bike crash on the block a year and a half ago, Jonathan and Kaye Steinsapir have avoided the majestic road near their house.

The couple filed suit last week against Rad Power Bikes, the burgeoning company whose product Molly Steinsapir was riding down the steep hill of Enchanted Way with a friend on Jan. 31, 2021. Steinsapir's friend tried to brake as they sped downhill, but the bike did not stop, and instead the girls lost control and were thrown to the concrete, where Molly lay face down, unresponsive, her helmet still on, according to the lawsuit.

"I used to walk there. I have not been up there since," Jonathan Steinsapir, 44, said. "It's a really beautiful street with beautiful ocean views. That's why the girls rode up there that day. I don't know if I avoided it at first. Now I kind of have because it brings on more and more meaning not having gone there since."

"I can't imagine ever going back to Enchanted Way again," Kaye, 44, added. "I can't even approach that area."

Rad Power Bikes declined to comment on the lawsuit and on questions about how it makes sure kids do not use its products meant for adults.

"The entire Rad Power Bikes team extends its deepest condolences to the Steinsapir family on the tragic loss of Molly Steinsapir," Brandie Gonzales, a spokeswoman for Rad Power Bikes, said in a statement.

They were at home a few blocks away when a neighbor called and told them Molly had been in an accident.

As they pulled out of their driveway, an ambulance sped past, and they followed it to the scene. The couple said they bickered as they drove to Enchanted Way, with Jonathan trying to convince Kaye that their daughter had probably just broken a bone.

The Steinsapirs, who have two boys, Eli and Nathaniel, lost their daughter. Molly died in the hospital a few weeks later after several brain surgeries. She never regained consciousness. Now Molly lives on in a mural painted in May that adorns the Pierson Playhouse, a theater in the Pacific Palisades where she acted in plays like "Guys and Dolls" and "Peter Pan."